Kim Jong Un (Kim Cho’ng-u’n) met with the heads of foreign government and political party delegations and attended a performance of the mass-games “Arirang” on 26 July (Friday).  Attending his meeting with the foreign delegations were Kim Yong Nam (President of the Supreme People’s Assembly Presidium), Pak Pong Ju (DPRK Premier), VMar Choe Ryong Hae (Director of the Korean People’s Army [KPA] General Political Department), Jang Song Taek (Vice Chairman of the DPRK National Defense Commission) Gen. Kim Kyok Sik (Chief of the KPA General Staff), Col. Gen. Jang Jong Nam (Minister of the People’s Armed Forces), Kim Kyong Hui (Korean Workers’ Party [KWP] Secretary and oldest daughter of late DPRK President and founder Kim Il Sung) and Kim Ki Nam (KWP Secretary and Director of the Propaganda and Agitation Department).  According to KCNA, “the guests warmly congratulated Kim Jong Un on the 60th anniversary of the victory in the war and wished him good health and greater successes in his work.”  Kim Jong Un thanked them for their wishes and “welcomed the foreign guests on a visit to the DPRK to take part in the celebrations of the anniversary and hoped that they would spend comfortable and joyful days here. ”

Kim Jong Un and members of the DPRK’s core political leadership greet the heads of foreign delegations visiting the country to commemorate the 60th anniversary of termination of the Korean War’s active hostilities (Photo: Rodong Sinmun).

Kim Jong Un and members of the DPRK’s core leadership greet the heads of foreign government and military delegation visiting the DPRK for events commemorating the 60th anniversary of the termination of the Korean War’s active hostilities (Photo: Rodong Sinmun).

Kim Jong Un later attended a performance of the mass gymnastic performance-cum-card stunt Arirang at Kim Il Sung (Kim Il-so’ng) Stadium in Pyongyang.  Attending Arirang with him were senior party, government and KPA officials, “officials of the party, armed forces and power organs, working people’s organizations, ministries and national institutions, bereaved families of martyrs, service personnel of the Korean People’s Army and the Korean People’s Internal Security Forces, merited persons and Pyongyangites.”  In the audience were “delegations of overseas Koreans and other overseas compatriots and the chief of the Pyongyang mission of the Anti-Imperialist National Democratic Front” and “delegations and delegates of various countries staying in the DPRK to participate in the celebrations of the 60th anniversary of the victory in the war, diplomatic envoys of various countries and representatives of international bodies and members of the military attaches corps here and other foreign guests.”

When Kim Jong Un arrived at the venue, according to KCNA, “the audience and performers broke into cheers of ‘hurrah!’ shaking the stadium and it presented spectacular scenery with varieties of rhythmic effects, lightings and the nocturnal sky was decorated with gorgeous fireworks.”  The performance began with a performance of the song “Arirang.”  According to KCNA the performance “made a grandiose epic representation of the 100-year-long history of Kim Il Sung and Kim Jong Il’s Korea in which its people put an end to the distress-torn history of the nation and put the sovereignty and dignity of the country on the highest level thanks to the outstanding leaders and peerless Military-First (So’ngun) commanders as well as the immensely prosperous era of Kim Jong Un.”  The performers “sang high praises of the exploits Generalissimo Kim Il Sung, an invincible and iron-willed commander, performed by accomplishing the historic cause of national liberation through long, bloody anti-Japanese battles and defeating the U.S. imperialists who boasted of being the ‘strongest’ in the world” and “represented the sky-high spirit of all service personnel and people dynamically pushing forward the building of a thriving nation at the ‘speed of Masik Pass,’ true to the leadership of Kim Jong Un, with beautiful rhythms, artistic rendition and dynamic gymnastics.”  The performance of Arirang “fully reflected the unshakable will of the service personnel and people of the DPRK to eternally glorify the great history of the victory in the war by protecting the dignity of the great Mt. Paektu (Paektusan) nation and meeting the challenges of the enemies through a merciless retaliatory sacred war.” 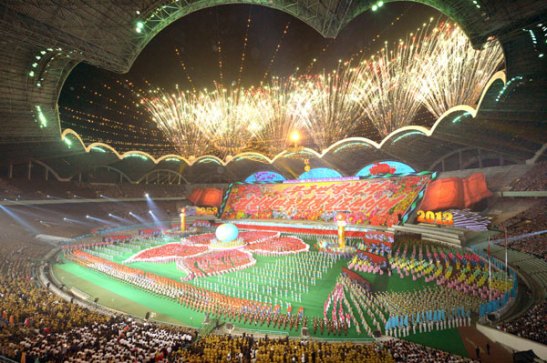 View of the Arirang performance at Kim Il Sung Stadium in Pyongyang on 26 July 2013. The DPRK’s mass games, which were cited by the Guinness Book of World Records, derive from 19th century Czech nationalist events (Photo: Rodong Sinmun).

According to KCNA, the audience “was mesmerized by the scenes representing the career of Generalissimo Kim Jong Il characterized by forced marches for patriotic devotion through which he protected the sovereignty of the country and the nation and provided an eternal cornerstone for prosperity” and “was deeply impressed by the chapter of friendship Arirang as it dealt with the exploits the great Generalissimos performed by recording shining pages in the history of DPRK-China and DPRK-Russia friendship and the will of the Korean people to boost solidarity with the world progressive people, guided by the idea of independence, peace and friendship.”  After the performance, the audience “audience and performers broke into rousing cheers of ‘hurrah!’ again shaking the stadium and fireworks were displayed to present fantastic scenery.”  Kim Jong Un waved at the crowd and congratulated the performers.

This entry was posted on 07/27/2013 by nkleadershipwatch in Uncategorized.