The DPRK Ministry of Land and Environmental Protection, in conjunction with the Swiss Development Cooperation Office DPRK, held an agroforestry (i.e. trees on farms) workshop from 4 to 8 August.  According to KCNA it was attended by DPRK Cabinet and institutional officials, researchers and teachers, along with officials from UN Food and Agriculture Organization, the EU Programme Support Office, the World Agroforestry Center‘s east Asia office and officials from the Swiss Development and Cooperation Office.  The workshop included a conference and speaking program, a discussion on the development of an agroforestry policy in the DPRK and a on-site visit to Suan County, North Hwanghae Province.  Ri Song Il, a department director in the Ministry of Land and Environmental Protection said “that the DPRK Government set the agroforestry management as an important economic strategy and established legal and mechanical systems, thus paving a way for carrying on the management on a nationwide scale” and “elaborated on the achievements gained in the management in Suan County, North Hwanghae Province and other parts of the country, with cooperation of international agencies and several foreign countries,” according to KCNA.

Swiss Development Cooperation Office head Martin Weiersmuller, who also adminsters a Swiss-DPRK program on sloping land management, said ” the 4th National Workshop on Agroforestry would serve as an occasion for sharing experience gained by the Ministry of Land and Environment Protection and his office in some 100 trial sites and attaining a legal framework for expanding the management.”  Other speakers from international organizations said “the agroforestry management played an important role in improving the people’s livelihood and restoring mountains’ scenery” and “referred to the ways for preventing land degradation in the management sites and exchanged experience and views they obtained in carrying on the management.” 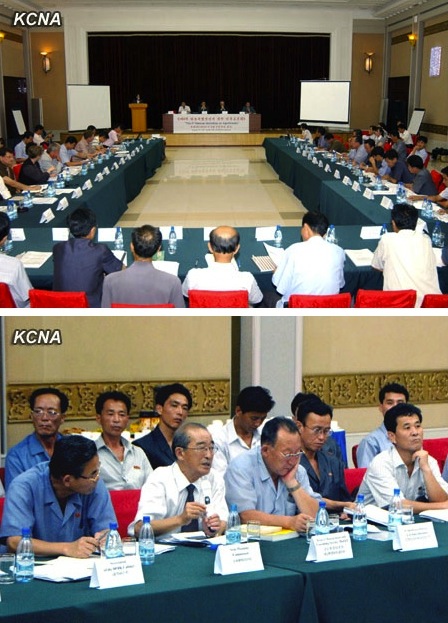 View of a session of the 4th National Workshop on Agroforestry in the DPRK, held from 4 to 8 August 2013 (Photos: KCNA).