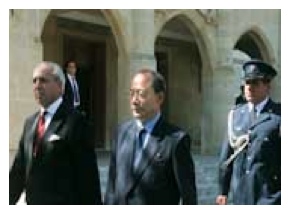 Kim Chunk Guk in Nicosia, Cyprus on 16 September 2013 (Photo: Office of the President of the Republic of Cyprus).

DPRK Ambassador Kim Chun Guk presented his letter of credence to the President of Cyprus Nicos Anastasiades on 16 September.  Ambassador Kim serves as the DPRK Ambassador to Italy and the Republic of Cyprus is one of his six nonresident postings.  Attending the meeting were DPRK officials, Cyprus’ Minister of Foreign Affairs Ioannis Kasoulides, Director of the Office of the President Panayiotis Antoniou and Protocol ChiefNearchos Palas.DPRK state media reported on 23 September (Monday) that during the meeting President Anastasiades “sincerely hoped for fresh success of the DPRK government and people in their efforts for social development, improvement of people’s livelihood and national reunification” and that “the split of the Korean Peninsula imposed on the Koreans against their will causes escalation of tension and confrontation. ”

Kim Chun Guk referred to the recent agreement to reopen the Kaeso’ng Industrial Zone (complex) and to the now aborted agreement on “the reunion of separated families.”  He also said the DPRK proposed interactions with the US to “continue to make all efforts to ease tension and achieve lasting peace and stability in the Korean peninsula in the future too.”  Ambassador Kim remarked that “it is a consistent policy of the Government to develop relations with EU countries, including Cyprus. Cyprus deserves to be highly appreciated due to its efforts devoted to the unity and development of the EU during its term as chair state of the EU in 2012” and told President Anastasiades that the DPRK supports “your efforts to achieve peace and prosperity of all Cyprus people by realizing unification of the country. Both of our two countries are small and have suffered from the country division for a long time.”  Kim Chun Guk also said “we hope that the friendly and cooperative relations between our two countries would be further developed and expanded in the political, economic and cultural areas. I wish Your Excellency success in your responsible work.”

According to the Republic of Cyprus’ Presidential office, President Anastasiades welcomed Kim Chun Guk to Cyprus and said:

Your presence provides us with a first-rate opportunity to review extensively our bilateral relations and seek ways and means in strengthening them. The signing of bilateral Agreements constitutes the first step in that direction.

Your Excellency: one time too many, the Korean Peninsula has occupied the front pages of the news; most of the times however, not for good reasons. Because of the ordeal the Korean people had to go through in the War of 1950-53 and the enormous losses in human lives they sustained, we believe it is high time for tension and confrontation to give their way to serious talks about cooperation, reconciliation and, why not, reunification.

The division of the Peninsula in 1945, aside from the manifest injustice it created against the Korean people, has left a huge scar to the present day, an indelible mark. It has also created gratuitous tension, provocations and confrontations. North East Asia has no need of those; the rest of world can live without them as well. It is for these reasons we all look forward to the resumption of serious negotiations for the complete denuclearization of the Korean Peninsula. The agreement on the Kaesong industrial complex must be praised for it shows once more the stamina, determination and the willingness of the two governments to work closely for the common good of their citizens. The same applies for another agreement concluded, which deals with a purely humanitarian issue: the reunion of families who have been separated since 1950. In both cases, despite adversity and the many and seemingly insuperable obstacles, hope has never faded. Progress was the result.

Excellency: the re-launching of the negotiations under the aegis of the Secretary-General of the United Nations in the framework of his Good Offices Mission, aiming at a fair, viable and mutually acceptable settlement to the Cyprus question based on the relevant Security Council Resolutions and the principles upon which the EU operates, remains our first priority.

The settlement must serve, above all, the legitimate interests and be for the benefit of the people of Cyprus as a whole and not for any third country. The negotiations must be properly and thoroughly prepared in order to ensure that the aforementioned objectives are jointly and unequivocally shared and that the negotiations will bear fruit. We cannot afford another failure. It is also my firm conviction that the substantive involvement of the European Union in this procedure is desirable.

Mr Ambassador: you can be assured that in the execution of your duties you may rely on the understanding and the cooperation of myself and the government. On my part, I would appreciate your conveying to H.E. Mr Kim Jong-un, First Secretary of the Worker’s Party of Korea, First Chairman of the National Defense Commission of the Democratic People’s Republic of Korea and Supreme Commander of the Korean People’s Army, a warm message of friendship and wishes for the well-being and prosperity of the people of his country”.