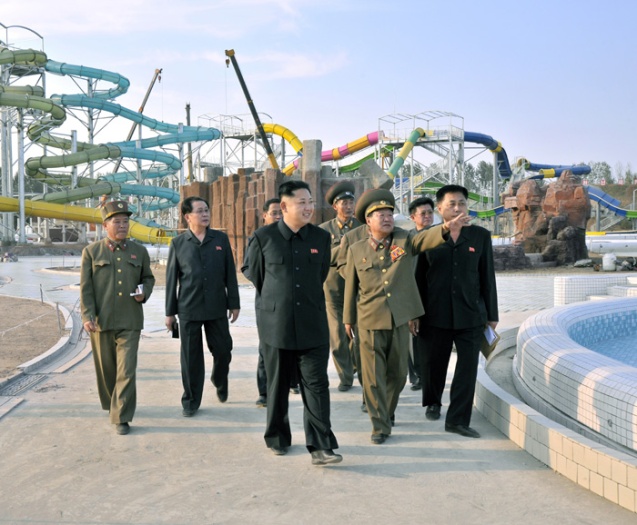 Kim Jong Un’s first stop was the Munsu Swimming Complex where, according to KCNA, “soldier-builders are now waging a high-pitched drive day and night, pushing ahead with the project at the final phase in hearty response to the appeal of the supreme commander for successfully completing the construction by Oct. 10, the anniversary of the WPK.”  In the indoor swimming pool’s lobby, Kim Jong Un “praised painters of the Mansudae Art Studio for having drawn a panoramic picture of the sea shore in perspective” to complement a statue of late leader Kim Jong Il (Kim Cho’ng-il) which will eventually be installed.  He said the indoor swimming pool looked “wonderful,” that “it admits sunrays” and he told the soldier-builders to paint the pillars of the slides with white color so that they may look fresh and nice.”  He also “told officials to hang a large clock on the wall of the pool and set up sound equipment to add to its cheerful atmosphere” and that “it is necessary to provide it with mirrors and hairdryers, etc. in order to ensure best convenience to the visitors.”  He instructed construction personnel “to properly furnish the complex with furniture such as amusement tables in its different places including the balcony of the restaurant.”  At an indoor sports facility Kim Jong Un “highly praised the soldier-builders for having successfully built the hall in a brief span of time in hearty response to the order of the supreme commander though it was not included in the original design” and added that “it was very good to build the hall in the indoor swimming pool and the KPA carries out whatever task assigned to it.”  Kim Jong Un “noted that if volleyball and basketball courts are built and a springboard is laid in the hall, youth and children will like them.”

He “was satisfied to see the walls of the swimming pool being decorated with pictures of seagulls, dolphins, water drops, etc” at the complex’s outdoor swimming pool and “he learned in detail about the assembling of various types of slides and the constructed wading pools and highly appreciated the success made in it.”  According to KCNA Kim Jong Un “told officials to build a room for first aid treatment and an observation tower so that rescue measures may be taken” and that “the swimming complex can be inaugurated only when all these conditions are provided.”  Kim Jong Un “underscored the importance of taking thorough measures for protecting the complex in winter” and he noted that “it is good that the complex is being built in such a way as to ensure the supply of geotherm so that the complex may consume electricity as less as possible.”  He also instructed the “planting trees of good species and creating a larger area of lawn inside and around the complex” and said that he “was very pleased to picture” the appearance of the area surrounding the swimming complex.   Kim Jong Un also said “that the dramatic change in the appearance of the area of Munsu is a miracle which can be worked only by the KPA possessed of the spirit of unconditionally carrying out any task under any circumstances” and he  “once again highly praised the soldier-builders for their feats.”

Kim Jong Un’s next stop was to the Mirim Riding Club.  He toured the “indoor riders training hall, service center for riders, outdoor spectators’ seats, circular riding training ground, riding school, stables, etc. to learn about the progress made in the construction.”  According to KCNA he “was greatly satisfied to learn that soldier-builders are pushing ahead with the construction of various buildings qualitatively at the final phase as required by the design of the club and methods of construction” and “pleased to see the soldier-builders pressing ahead with the construction of the horse-breeding institute and the epizootic hospital at a rapid speed as he instructed them while providing field guidance to the construction site in last August.”  Whilst watching the construction of a wall “he underscored the importance of successfully applying antiseptic treatment to it so that the quality of timber is preserved and it is prevented from getting rotten.”  Kim Jong Un was then briefed about the outdoor equestrian tracks.  He said that “it looks nice” and that “it is better to plant acacia along the line inside the track.”  He was informed that “the track has been built with famous Kaeso’ng weathered gneiss mixed with salt in order to increase the capacity for preserving humidity and sterilization efficacy” and  “underlined the need to take thorough measures for providing the best convenience to the riders.”  On the grass track he said that “So’ngch’o’n golden turf of Korea is the best for riding track as it is strong in vitality and resistance to stamping.”  He was briefed about the riding club’s landscaping then went up a hill to see the club.

According to KCNA he ” stressed the need to plant fir trees which offer foliage in all seasons and maple trees along with flower shrubs” and said that “it is good to plant willow trees around the artificial pond which will have artificial falls and beach in order to add to the scenic beauty.”  He said  “it is important to build a walking road for visitors’ stroll on horse and cosy pavilions so that they may have good rest” and “it is necessary to steadily push ahead with the work for creating greenery after the construction of the riding club is over.”  Kim Jong Un “stressed the need to make good preparations to operate the club as it is near completion” and remarked on his “belief that the soldier-builders would unconditionally finish the construction of the riding club as scheduled as it is the WPK’s gift to the people.”