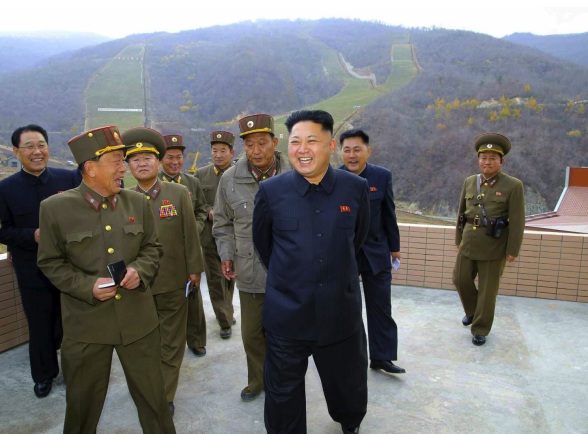 Returing for his  third trip to Masik Passk Ski Resort since construction began, Kim Jong Un’s first stop was at the hotel where he  “wassatisfied to see the hotel built to match the mountainous scenery and natural environment as required by the design ratified by the Party” and “appreciated the hotel as a flawless structure and model building as it fully meets the requirements of the Party’s idea of architectural beauty which calls for designing and constructing all construction objects according to their features and purposes.”  At a sitting area, he praised “the soldier-builders for building well the resting places as intended by the Party” and, according to KCNA, he “instructed them to build all resting places to be impeccable so that the visitors to the ski resort may not only train their physical bodies but have a pleasant rest.” 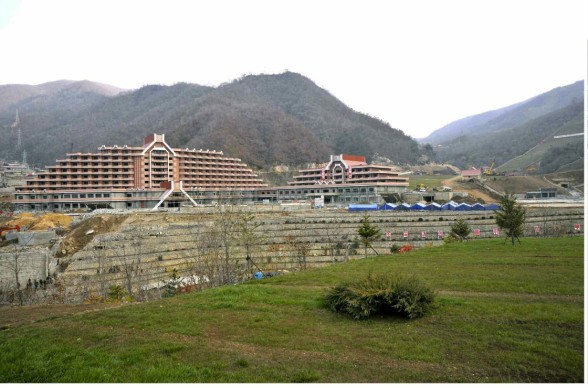 View of the construction of the Masik Pass Ski Resort in Kangwo’n Province (Photo: Rodong Sinmun). 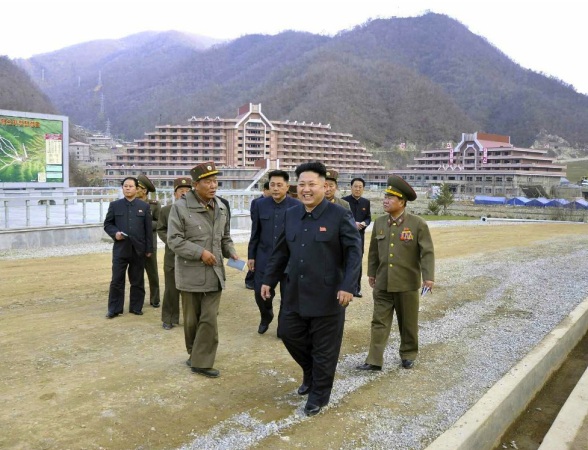 Kim Jong Un toured the ski trails and said “it is nice to see the skiing courses constructed by builders as required by the construction method and the turf planted with good care.” He also said that “the construction of the ski resort conceived and initiated by the Party is near its completion” and “that this is entirely ascribable to the merits of the soldier-builders and a shining fruition of their heroic feats.”  According to KCNA, Kim Jong Un remarked that “he was quite right when he assigned the project for building the ski resort to the Korean People’s Army and it carried out a great nature-remaking project and the new watchword the  ‘speed on Masik Pass’ is shining more brilliantly thanks to the KPA” and “that the WPK is proud and honored to have such army.”

Referring to the KPA’s contribution in the development of the country’s sports economy Kim Jong Un said that the “the KPA has done a lot of work for the people this year including the construction of Munsu Water Park and Mirim Riding Club and “that when the ski resort on Masik Pass is completed, more cheerful laughter of people will be heard from the area of Masik Pass.”  He also said that “all participants in the construction are patriots and the feats performed by them would go down in the history of building a rich and powerful country” and “indicated tasks to be fulfilled for building the ski resort as the world’s best one and ways to do so.”