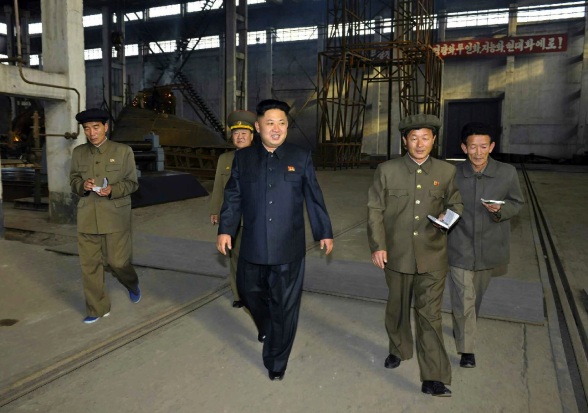 DPRK state media reported on 1 November (Friday) that Kim Jong Un (Kim Cho’ng-u’n) visited a shipyard and the Korean People’s Army [KPA] Navy Unit #790 Martyrs’ Cemetery.  At the latter visit DPRK state media disclosed that the crew of a submarine chaser was killed “while performing their combat duties in mid-October.”  Based on images released of the memorial stones, the KPA Navy crew died on or around 13 October 2013.  Yonhap,citing an unnamed source, reported that the crew were killed in action during a training exercise near Wo’nsan on the DPRK’s east coast.  Kim Jong Un’s last observed appearance was his attendance at live fire exercises with participants in the 4th Meeting of KPA Company Commanders and Political Instructors.

Kim Jong Un first visited a shipyard under the management of Ju Song Ho.  Attending the visit was VMar Choe Ryong Have (Director of the KPA General Political Department).  He toured a sheet metal shop and assembly facilities.  According to KCNA he “was greatly satisfied to learn that the officials, workers and technicians of the shipyard were waging a dynamic drive to build modern ships” and said that “there is no goal out of reach as long as there are proud and brave workers who heartily respond to the Party’s idea of pushing back the frontiers of the latest science and technology and make devoted efforts to translate it into reality.”  Kim Jong Un also said that “thanks to the wise leadership of Generalissimos Kim Il Sung (Kim Il-so’ng) and Kim Jong Il (Kim Cho’ng-il) solid shipbuilding bases were established in the country” and he noted that “this is a powerful demonstration of the might of the self-supporting national economy.”  He “underlined the need to make sustained efforts to build modern ships at the shipyard” and noted “that the development of the shipbuilding industry is of very weighty importance in the country as it is surrounded by sea on three sides.”  Kim Jong Un remarked that “it is necessary to develop the shipbuilding technology, put the production process on a scientific and modern basis and ensure the best quality of all parts as the shipbuilding industry is one of the important criteria showing the nation’s level of the development of science and technology and industry” and stressed that “in order to build modern ships the relevant units should produce necessary equipment and raw and other materials qualitatively and supply them in good time.”  He issued instructions on production and development to the shipyard’s managers and expressed “his expectation and belief that its workers would creditably perform their honorable mission and duty.”

Annotated on this grave stone is the date (13 October 2013) that members of a KPA Navy crew were killed. According to ROK sources, the crew was killed during a training exercise off the coast of Wo’nsan, Kangwo’n Province on the DPRK’s east coast (Photo: Rodong Sinmun).

Kim Jong Un brings a bunch of flowers to a memorial at a cemetery for KPA Navy officers and service members killed in action in October 2013 (Photo: Rodong Sinmun).

Kim Jong Un’s next visit was to the martyrs’ cemetery of KPA Navy Unit #790, constructed in memory of KPA service members and officers killed in action aboard a submarine chase on 13 October 2013.  Attending the vista were VMar Choe Ryong Have, Lt. Gen. Ryom Chol Song, VAdm Kim Myong Sik (Commander of the KPA Navy), Pak Thae Sy, Jo Nam Jin, Hwang Pyong So (Deputy Director of the Korean Workers’ Party [KWP] Organization Guidance Department), Kim Tong Hwa, Hong Yong Chil (Deputy Director of the KWP Machine-Building Industry Department) and Ma Won Chun (Deputy Director of the KWP Finance and Accounting Department).  According to KCNA after the naval accident, Kim Jong Un instructed that the unit’s members’ remains be recovered and directly supervised the cemetery’s construction hence “the above-said commanding officers and sailors thus came to enjoy immortality thanks to his profound loving care.”  Upon arrival, Kim Jong Un along with senior KWP and KPA officials in attendance placed flowers in front of a memorial and observed a moment of silence.

Kim Jong Un and senior KWP and KPA officials view the graves in a KPA Navy cemetery constructed for personnel killed in action on a submarine chaser in October 2012 (Photo: Rodong Sinmun).

He toured the cemetery.  Whilst looking at images on the grave markers he said “that he felt as if they had risen up to greet him” and that the cemetery is located in a very good place as it is near from where the unit is stationed.”  He also said “that sailors of the unit have now become able to sail for performing their combat duties as requested by the fallen fighters after bidding farewell to them” and “that he felt much relieved after having a burial ceremony for them.”  According to KCNA Kim Jong Un “noted that he could hardly go to sleep, when thinking they died at so young ages, though the defense of the country is accompanied by sacrifices,” said “he felt heartbreaking when thinking of the fallen fighters who served in the navy, their hearts burning with the dream and hope to perform feats with great ambition and their parents grieved at their deaths and their wives who had waited for their return from voyage” and “what bitter sorrow they might feel as he felt so painful.”

After his tour of the cemetery he said  “that there should be the name of the owner of each grave” and that “he would like to be that owner and asked officials to carve his name on the grave stones. I will feel relieved a bit only when my name is carved on them.”  Kim Jong Un also said that “the martyrs are his comrades-in-arms and comrades” and “stressed that although they died before realizing the lifetime desires of the great Generalissimos under the leadership of the supreme commander, they showed all service personnel how a soldier should carry out the order of the country through their heroic deaths.”  He remarked that “the revolutionary spirit of the martyrs who readily dedicated their precious lives to defending the country’s sea will always live on” and said “not only the sailors of the unit but all the service personnel of the KPA should learn from the exploits and noble spiritual world of the martyrs who firmly defended their posts till the last moments of their lives and carried out the combat order at the cost of their lives. “