Is P’anmu’njom the New Stop for Foreign VIPS?

(n.b. the following focuses only on foreign government, nongovernmental organization [NGO] officials and foreign delegations visiting P’anmunjo’m and does not account for inter-Korean contacts and activity, US Forces Korea-Korean People’s Army interactions and all but one occasion where the border was crossed)

In 2013 there have been eight (8) high-profile visits or events at the DPRK side of P’anmunjo’m, located in the demilitarized zone [DMZ] that separates the two Koreas.  The number of visits in 2013, as reported in DPRK state media, is equal to the total number of visits made from 2007 to 2012.  During a four-day visit to the DPRK from 5 to 8 November 2013, a South African government delegation headed by Deputy Minister of International Relations and Cooperation Ebrahim Ismail Ebrahim, visited the truce village at P’anmunjo’m.  On 3 November a delegation of Indonesia’s legislature the Consultative People’s Assembly led by its chairman Sidarto Danusubroto also visited P’anmunjo’m where according to KCNA they visited a Kim Il Sung (Kim Il-so’ng) autograph monument and “went round the hall where the armistice talks took place, the hall where the armistice agreement was signed and Panmun Pavilion, being briefed on the fact that the army and people of the DPRK beat back the invasion by the U.S.-led imperialist allied forces and won a shining victory.”

According to Yonhap, during his visit to the DPRK from 4 to 8 November, China’s special representative for Korean Peninsula Affairs, Wu Dawei visited P’anmunjo’m on 6 November.  The DPRK side of the DMZ is quickly becoming part of senior foreign officials’ itineraries during their trips to the DPRK.  On 29 October Mongolian President Tsashiagiin Elbegdorj became the first foreign head of state to visit P’anmunjo’m.  President  Elbegdorj and the senior Mongolian officials who accompanied him were not the first group of foreigners in 2013 who visited P’anmunjo’m.

The motivation for DPRK protocol officials sending foreign VIPs on tours of P’anmunjo’m is not clear.  It could be because of commemorations of the 60th anniversary of the armistice of the Fatherland Liberation (Korean) War or it could be linked to outstanding issues over the Kaeso’ng Industrial Zone.  For number of years, the South Korean side of the DMZ has been the setting of news reports on inter-Korean tensions, and the South Korean side of P’anmunjo’m attracts numerous foreign visitors (including several US Presidents).  Interestingly, it appears that the DPRK side of P’anmunjo’m may have replaced the International Friendship Exhibition in North P’yo’ngan Province as the locale for foreign VIPs’ excursions outside Pyongyang. 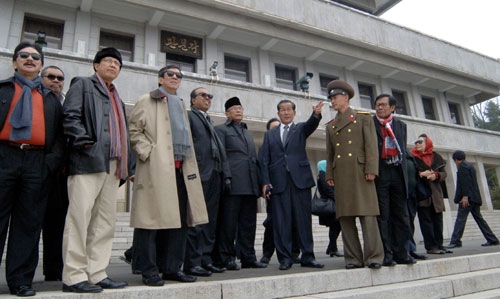 In August a delegation of International Committee of the Red Cross headed by its president Peter Maurer, toured the truce village.   Later the same month, DPRK also organized a send-off ceremony for a group of New Zealand motorcyclists traveling from Mt. Paektu in the north to Mt. Halla in the South and who passed through the Military Demarcation Line [MDL] via P’anmunjo’m.  In July, on the sidelines of the DPRK marking the armistice of the Fatherland Liberation (Korean) War, a peace march from Pyongyang to Kaeso’ng ended with participants visiting P’anmunjo’m.  Three days after that event, the KPA staged a music and dance performance at the truce village to mark the end of the war’s active hostilities.  Prior to the war anniversary events, a delegation of the European Parliament visited P’anmunjo’m and in June the area was toured by defense attaches stationed in the DPRK and a study group of KPA service members.

This entry was posted on 11/20/2013 by nkleadershipwatch in Uncategorized.