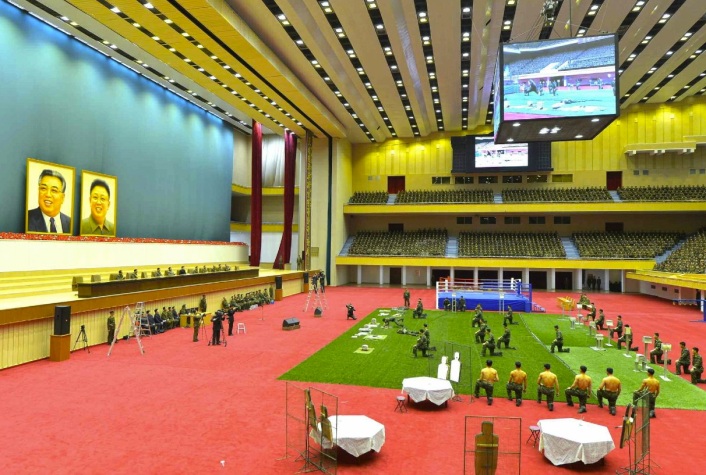 Overview of a kyoksul demonstration by service members of KPA Units #3168 and #695 (Photo: Rodong Sinmun).

Along with participants in a meeting of “frontline soldiers,” Kim Jong Un watched a demonstration of kyoksul (a form of karate widely practiced in the KPA) by service members of KPA Units #3168 and #695.  According to KCNA, “training ground was pervaded with sky-high militant spirit” and the KPA service members participating in training exercises “fully demonstrated the might of the heroic KPA, which has grown stronger to be a matchless army under the guidance of Kim Jong Un, a great brilliant commander of So’ngun (military-first) who has firmly protected the dignity of the country and sovereignty of the nation by foiling all moves of the imperialists and reactionaries with his matchless pluck, iron will and outstanding strategy.”  After the demonstration, Kim Jong Un “expressed great satisfaction over the fact that the soldiers are fully prepared to safeguard the socialist country and highly appreciated them for their successful training” and said that “the chuch’e-oriented revolutionary cause is invincible as there is the KPA strong in idea and faith, which regards it as its unshakable will to protect the leader unto death in the spirit of becoming human bullets and bombs and in the self-blasting spirit.”  He also “gave important instructions which would serve as guidelines for bolstering up the combat capability of the KPA in every way.”

Kim Jong Un also attended a commemorative photo session with participants in meeting of officers and service members stationed in the KPA’s forward deployed units.  According to KCNA, he “highly appreciated the feats of the participants in the meeting who are unhesitatingly dedicating their youth and lives to the sacred military service despite rain or snow with revolutionary faith, gem- like conscience and true sense of moral obligation” and he said that “all frontline soldiers including the participants are precious revolutionary comrades and comrades-in-arms of the WPK” and “expressed expectation and belief that they would successfully perform their honorable mission and duty in carrying out the So’ngun (military-first) revolution, always bearing in mind the trust of the party in them.”

This entry was posted on 12/28/2013 by nkleadershipwatch in Uncategorized.