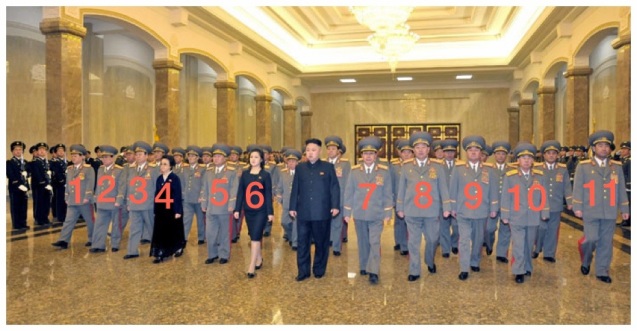 At midnight on 16 February (Sunday), Kim Jong Un (Kim Cho’ng-u’n) and senior Korean People’s Army [KPA] officials visited the Ku’msusan Palace of the Sun to pay their respects to the preserved remains of his father late leader Kim Jong Il (Kim Cho’ng-il) on his birth anniversary.  The group of senior military officials who accompanied Kim Jong Un to Ku’msusan in 2014 is almost entirely different from the group that accompanied him in 2013.  Of the officials who lined up in the first row with Kim Jong Un beneath of statues of his Kim Il Sung and Kim Jong Il in 2013, only KPA General Political Department Director VMar Choe Ryong Hae was present in 2014.  In 2013 three members of the Kim Family attended Kim Jong Un’s visit to Ku’msusan; in 2014 no family members were reported or observed to have attended the visit.  The number of DPRK elites occupying the first row with Kim Jong Un also dropped, from 12 in 2013 to eight (8) in 2014.

The composition of Kim Jong Un’s entourage at Ku’msusan on the 2014 Day of the Shining Star (KJI’s birthday) reflects the numerous personnel changes that affected the KPA’s high command during 2013.  Attending both visits in 2013 and 2014 were the Minister of the People’s Armed Forces, 1st Vice Minister of the People’s Armed Forces and Chief of the KPA General Staff, however all of the 2013 officeholders have been replaced.  Those in the front row along side Kim Jong Un in 2014 have lower political statuses and military ranks than those in attendance in 2013.  In 2014, Kim Jong Un was accompanied by only one other member of the Korean Workers’ Party [KWP] Political Bureau–VMar Choe Ryong Hae; in 2013 seven KWP Political Bureau Members were in the front row with KJU.  In 2014 with KJU in the first row were: one (1) Major General, one (1) Lieutenant General, four (4) Colonel Generals, one General and one Vice Marshal.  In 2013 with KJU in the first row were one (1) Colonel General, five (5) Generals and four (4) Vice Marshals.

The photo of the 2014 visit to Ku’msusan shows that two senior KPA officials–VMar Kim Jong Gak and Gen. Kim Kyok Sik–moved to the second row after being in the front row in 2013.

**This figure counts Kim Kyong Hui as representing the NDC.

This entry was posted on 02/17/2014 by nkleadershipwatch in Uncategorized.