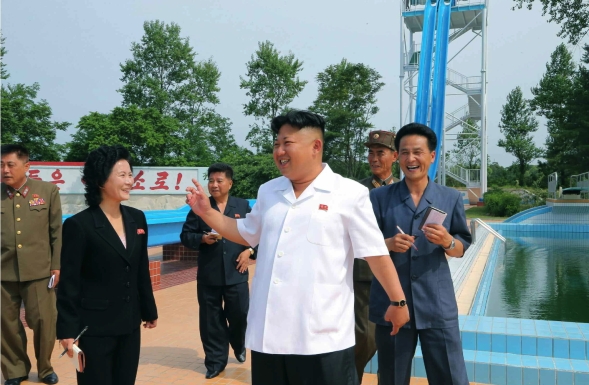 KJU toured various sites at the camp.  He looked at a waterside and wading pool and remarked that the “longer he watched it, the more wonderful it looked, adding children would like it.”  According to KCNA he said “I am very pleased to see it as it was made by our own efforts and with our own technique. It looks nice with the brand of ‘Taedonggang’ ” and  “appreciated its successful installing, instructing officials to let the next-term campers fully enjoy it.  At a dive tour he “told officials to ensure a proper filtering of water so that the outdoor wading pool may be full of clean water.”  KJU toured a house of mirrors and “was pleased to see the number of playing grounds for children increasing at the camp day by day.” He also remarked that “this cheerful laughter of children would instill the conviction of victory and optimism into our people.”

Kim Jong Un also visited an aquarium at the camp and was “pleased that species and numbers of rare fishes including shark increased.”  During a tour of the beach, according to KCNA “he told officials to provide the camp with sailboats so that campers may enjoy marine sports.”

He also looked at the construction of a railway station designated for the camp’s use and said “now that direct train service is available for campers and arrangements have been made for its operation, it is necessary to build the station well to suit the nature of its service, while providing the best convenience of the campers.”  KJU also underscored “the need to manage well the camp which was built by the party with much effort” and issued tasks “to be fulfilled to manage and operate it.”  At the end of his visit he posed for a commemorative photo with with the camp’s managers and employees.

The railway station reported as being “under construction” is possibly renovation work at a station used by KJU’s father, late leader Kim Jong Il (Kim Cho’ng-il).  This railway station sits across a canal from the Kim Family’s Wo’nsan residential compound.  KJU has generally favored availing himself of exclusive roads and tunnels, as well as airplanes, to travel around the country, it’s likely he has foregone traveling by rail, thus reducing the need for an exclusive railway station to travel to the Wo’nsan compound (other members of the Kim Family and DPRK elites travel to the compound by car).  On the other hand, he may have ordered a new railway station to be constructed as part of the renovation of Songdowon International Children’s Camp.  If that is the case then it is highly likely the station was constructed on the same railway line on which the VIP station sits.