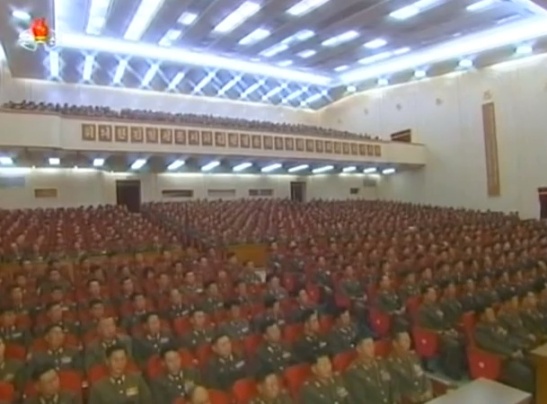 Participants at an event commemorating the 20th anniversary of Kim Il Sung’s death, held at the Ministry of the People’s Armed Forces in Pyongyang on 6 July 2014 (Photo: KCTV).

The Ministry of the People’s Armed Forces [MPAF], the DPRK’s defense ministry, held a symposium to commemorate the 20th anniversary of the death of the late DPRK founder and president, Kim Il Sung (Kim Il-so’ng) on 6 July (Sunday).  Attending the event were senior MPAF officials and Korean People’s Army [KPA] officers and service members.  Symposium speakers included Gen. Ri Yong Gil (Chief of the KPA General Staff), Gen. Hyon Yong Chol (Minister of the People’s Armed Forces)** Col. Gen. Kang P’y’o Yong (Vice Minister of the People’s Armed Forces) and Lt. Gen. Ryom Chol Song (Deputy Director of the KPA General Political Department).  According to KCNA the speakers remarked that “the greatest of the feats performed by the President is that he fathered the immortal Chuch’e idea to indicate a genuine path for the oppressed Korean people and progressives to carve out their destinies,”  that Kim Il Sung “strengthened the KPA into the army of the party and the leader throughout his life and devoted himself to the development of the army into an invincible revolutionary army strong enough to defeat any formidable enemy at a single stroke” and that he “formed the integral whole of all the service personnel and people who share the same intention and feelings with his warm comradely love.”  The speakers also noted that KIS “set forth the guidelines of revolution and steadfastly adhered to them in the practical struggle to overcome the severe trials and ordeals” and they  “called for strengthening the KPA into the army of the leader and the party true to the leadership of Supreme Commander Kim Jong Un (Kim Cho’ng-u’n).”