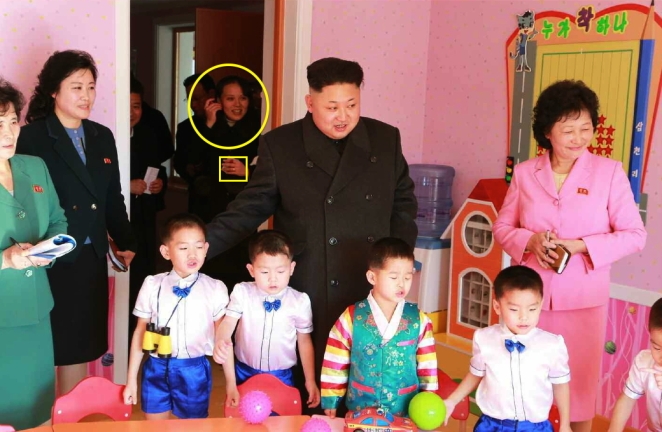 Kim Yo Jong (circled) with a gold ring on the third finger of her left hand (box) at the Pyongyang Baby Home and Orphanage on January 1, 2015 (Photo: Rodong Sinmun).

On January 2, 2015, Yonhap reported that WPK Propaganda and Agitation Deputy Director Kim Yo Jong (Kim Yo-cho’ng), younger sister of Kim Jong Un (Kim Cho’ng-u’n), married a son of WPK Secretary and close KJU aide Choe Ryong Hae during 2014.  A “reliable source in China” told Yonhap, “As far as I know, Kim Yo-jong, deputy director of the Workers’ Party, got married to a son of the party’s secretary Choe Ryong-hae.”  In DPRK state media coverage of KJU’s visit to the Pyongyang Baby Home and Orphanage on January 1, Kim Yo Jong was observed wearing a gold ring on the third finger of her left hand, a possible indication of her marital status.    Kim Yo Jong’s husband, who works in the WPK Finance and Accounting Department and is linked to Office #39,  is rumored to be Choe Song, the second son of Choe Ryong Hae and his wife Kang Kyong Sil.  Kang was a dancer in the Mansudae Art Troupe during the 1970s and had personal ties to Kim Yo Jong’s (and KJU’s) mother Ko Yong Hui.

Kim Yo Jong, who was born in 1987, is 27 years old.  Other members of her immediate family have typically been married in their mid-to-late 20s**:

Kim Jong Chol was the first adult child of KJI’s relationship with Ko Yong Hui to be married.  In February 2011 Japanese media recorded video footage of Jong Chol attending an Eric Clapton concert in Singapore which found him, and a woman intimately seated to his left, wearing wedding bands.  This corroborated Pyongyang-based rumors from 2008 that Jong Chol had been married.

The Band on Her Hand (stay strong, baby)

Even though Kim Yo Jong has been spotted with a gold ring on the third finger of her left hand, it does not necessarily indicate her marital status.  In contrast to her elder brother Jong Chol, she is a public figure in the DPRK’s political culture.   Married senior WPK officials, and DPRK elites in general, who appear in state media or at public events typically do not wear their wedding bands, if they own them at all.   DPRK elites under the age of 50, who are not public figures in the country have been observed in Pyongyang wearing bands.

This gold ring engraved with the year 2000 was presented on January 1, 1990 to Kim Jong Il’s former sushi chef and 22 other close aides and staff at a New Year’s Day banquet. In passing out the rings KJI said, “Putting on this ring, let us greet the year 2000 in 10 years.”

Kim Jong Il used to give out gold rings, other pieces of jewelry (famously, gold Swiss watches) and precious gems to family members, cadres in the central party and staff members.  Engraved gold watches are presented to merited persons by the DPRK Government.  Kim Jong Un has kept the Gifts Office open, but has favored electronics (tablets, laptops) and appliances.  Given the number of recent anniversaries on the DPRK’s official calendar (KJI’s demise, Kim Jong Suk’s birthday, KJI and KJU’s assumption of the KPA Supreme Command) Kim Yo Jong’s gold ring could well be a nostalgic gesture to her father.

**In the DPRK wedding licenses are often not granted to women who younger than 27 and men who are younger than 30.  According to Helen-Louise Hunter these laws are strictly enforced by the Ministry of People’s Security as a means to control the country’s birth rate.