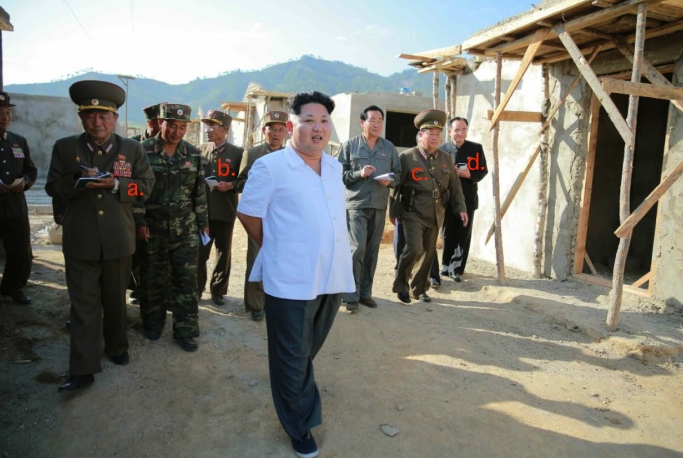 According to KCNA, Kim Jong Un remarked that he visited the city because he “could hardly fall asleep, thinking of the citizens left without shelter due to flood damage and he could feel relieved only after looking round the scenes of recovery drive.”  After seeing houses “springing up like mushrooms after rain thanks to the devoted struggle of service personnel to thoroughly implement the order of the Party” he said, “I feel freed from all cares and worries.”

Jong Un was briefed about ongoing recovery efforts (“the Party took important measures one after another”) and that the local population was “deeply touched by the repeated loving care shown by the Party for them.”  He said that it was the  “bounden duty of the Workers’ Party of Korea to take warm and responsible care of the destiny of the people whom President Kim Il Sung (Kim Il-so’ng) and leader Kim Jong Il (Kim Cho’ng-il) regarded as Heaven in their lifetime and officials should not be complacent with the work for the people.”  According to KCNA, Kim Jong Un said that “it is a great success that service personnel and people have wound up, in the main, projects for repairing the inundated houses for thousands of families and temporary rehabilitation of power, telecommunications and railway networks in the city since the start of the recovery drive by their concerted efforts.”

He also noted that it is his “determination to build dwelling houses more wonderful, modern and better than the old ones for the people in the afflicted area” and he issued instructions “to dynamically push ahead with the construction of dwelling houses as a main thrust of the recovery drive in the city.”  Jong Un “called on all builders to wind up the drive at the highest level without fail before the 70th founding anniversary of the WPK by fully displaying the spirit of devotedly implementing the decisions of the Party, the spirit of flattening even a mountain and emptying even a sea, and thus make the rousing cheers for socialism, the WPK and single-minded unity heard in the sky in October.”

Kim Jong Un said that “the people of the DPRK are the best in the world as they believe in and invariably follow the WPK only.”  Jong Un  “ardently called on the officials to dedicate themselves to the work for the happy future of those people, always remembering their trust and expectation, and take warmer care of them, true to the noble intention of the great leaders.”