View of the rostrum at a November 2 meeting marking the 70th anniversary of Rodong Sinmun (Photo: KCTV)

A meeting commemorating the 70th anniversary of the foundation of Rodong Sinmun, the Workers’ Party of Korea’s [WPK] daily newspaper (and the DPRK’s paper of record), was held at the People’s Palace of Culture in central Pyongyang on November 2 (Monday).  Attending the meeting was Kim Ki Nam (WPK Secretary and Director of the Propaganda and Agitation Department), Ri Yong Sik (Editor of Rodong Sinmun), DPRK news editors and reporters, worker/farmer writers and a delegation of Choson Sinbo, the multi-media outlet of Chosen Soren (Ch’ongryo’n; General Association of Korean Residents in Japan). 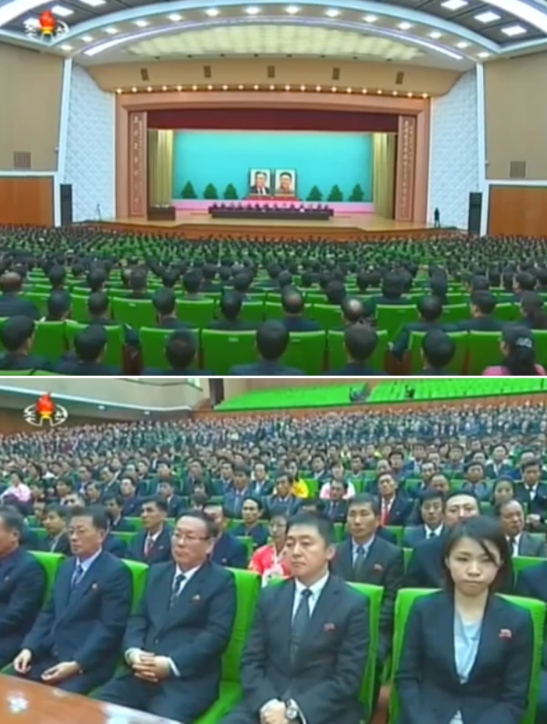 View of the People’s Palace of Culture in central Pyongyang, the venue for a November 2 meeting marking the 70th anniversary of Rodong Sinmun (Photos: KCTV)

Ri Yong Sik delivered the anniversary meeting report in which he said that “the founding of Rodong Sinmun helped the WPK have mighty ideological vanguard for training all party members and other working people as staunch revolutionaries of Chuch’e type and dynamically promoting the Korean revolution and the cause of human independence under the banner of independence, Songun (Military-First) and socialism.”  Ri “recalled that under the care of the great leaders and Marshal Kim Jong Un (Kim Cho’ng-u’n) the officials, journalists, editors and employees of the newspaper have creditably performed the mission and duty they assumed before the times and the revolution.”  Ri also “called on all the officials, journalists and editors to dynamically wield the pens of the revolution and successfully fulfill their honorable mission as ideological standard-bearers in carrying out the revolutionary cause of Chuch’e, rallied close around the Central Committee of the Workers’ Party of Korea headed by Kim Jong Un.”