Jong Un toured greenhouses, cultivation ground and other parts of the tree nursery and gave “precious instructions to conduct a more dynamic forest restoration campaign.”  According to KCNA he said, “we should not slacken our campaign because no noticeable success is achieved in planting trees in a few years as the forest restoration campaign is a work of lasting significance and long-term one which calls for foreseeing ten years” and he underscored “the need to plant and tend even a single tree with good care, thinking of the future when the mountains and fields of the country will be thickly wooded, though we work hard at the moment.  It is necessary to update the nurseries at a high level in order to register successes in the forest restoration campaign.” 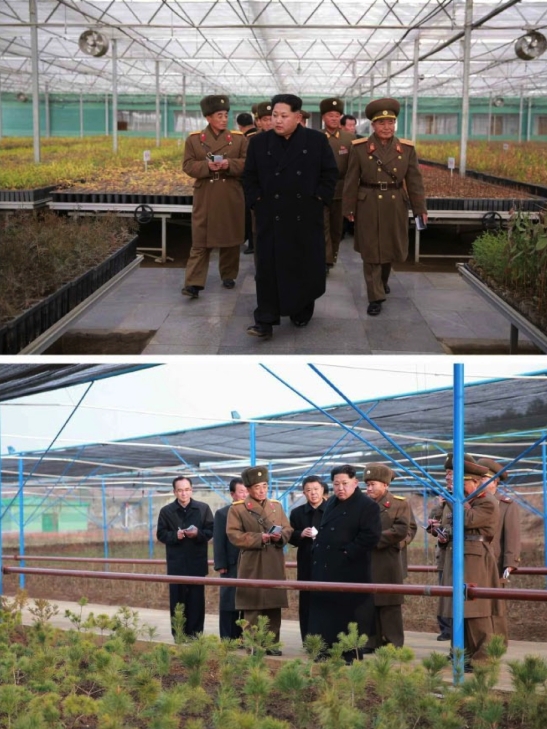 Kim Jong Un also remarked that the “tree nursery is not just a place for producing and supplying saplings but a main thrust in the forest restoration campaign” and he emphasized “that he visited the nursery for the purpose of turning it into a model tree nursery of the 21st century which has been placed on a scientific, industrial and intensive basis as required by the age of knowledge-based economy and an icon and standard of the nation’s tree nurseries.  It is necessary to put the tree nursery on a modern and scientific basis in order to plant trees in every season as intended by the Party, away from the outdated method of planting trees only in spring and autumn and decisively boost the rate of rooting of saplings.”

Kim Jong Un is briefed about the cultivation of tree saplings at KPA Tree Nursery #122. Also in attendance are Jo Yong Won [A] and Kim Kyong Jun [B] (Photo: Rodong Sinmun).

He called on the KPA “to take the lead in the campaign for modernizing the nurseries as required by the age of knowledge-based economy, he took such a benevolent measure as personally settling on the spot all problems arising in the modernization of the nursery ranging from its design to supply of building materials and mobilization of the construction force.”  Whilst “enjoying a bird’s-eye view” he said that he was “was pleased to foresee the dramatic change to take place in the area of the nursery six months later” and  “ardently called for working hard together to create another valuable asset of the country to be conducive to turning the country into a thick woodland and greenery.”

This marked the first observed appearance of VMar Hwang Pyong So in over three weeks.  VMar Hwang’s last appearance was when he delivered the eulogy at the state funeral for Mar Ri Ul Sol in early November.  Hwang appeared at Kim Jong Un’s visit 24 hours after ROK state media reported that he may have traveled to China to seek medical treatment for his vertebrae.