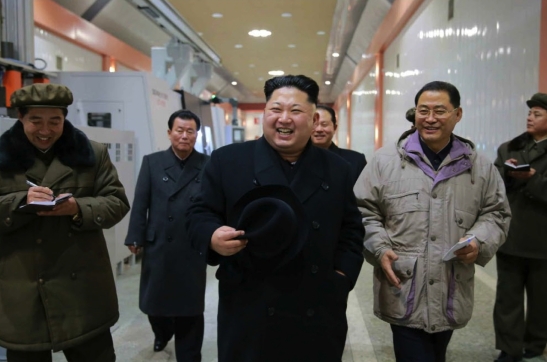 Kim Jong Un enjoyed “a panoramic view of the plant” and he joked that it had “been face-lifted so freshly that one can hardly find traces of its past.  New visitors to the plant will take it for a rest home.”  Jong Un toured the factory’s revolutionary history museum and, according to KCNA, said that “they were well built to display the historic data and relics” and “stressed the need to effectively conduct among the employees of the plant the education in the exploits performed by President Kim Il Sung (Kim Il-so’ng) and leader Kim Jong Il (Kim Cho’ng-il) and the Party for it.” 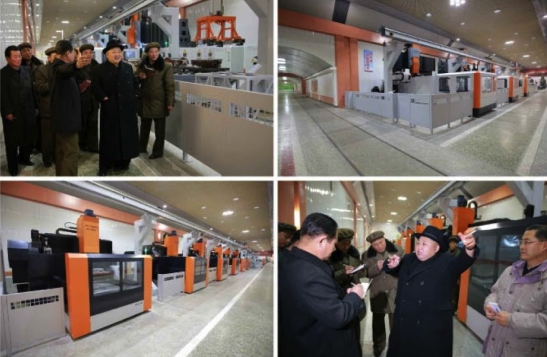 He toured the plant and was briefed about its upgrading and renovation.  According to KCNA, Kim Jong Un remarked that the “plant has been turned in keeping with the trend of the development of industry in the 21st century as it possessed enough modern equipment and established a flexible manufacturing system, made up of NC (numerical control) machine tools, robots, unmanned material carrier, automatic storehouse, etc., with domestic design, technology and efforts” and said that “the plant has been put on a scientific, IT, automated and unmanned basis at a high level, making it possible to remarkably raise the production with less manpower and further improve the quality of products.”  Jong Un “urged the plant to continue directing big efforts to the work for overfulfilling the production plan on all indices by keeping the production going at a high rate, steadily developing the employees’ technical knowledge and skills, improving the supply service, taking good care of equipment and keeping the inside and outside of the plant neat and tidy.”

According to KCNA, Kim Jong Un said that the January 18 General Machinery Plant was “successfully remodeled to meet the needs of the age of knowledge-based economy and a highly-civilized socialist nation at the time when exemplary and standard units for modernization appear at industrial establishments, rural community and other fields of the country.  This provided a springboard for further developing the nation’s machine-building industry, a standard for its modernization.”  He also said that “to update the industrial establishments is not a mere economic and technical work but an important work to translate into reality the noble intention of the great leaders and thoroughly implement the Party’s policy” and he  “called for making the flame of modernization drive kindled at the plant rage furiously throughout all sectors and units.”  At the end of his visit, Kim Jong Un posed for a commemorative photo with employees, managers and functionaries of the plant.