Kim Jong Un speaks at a joint expanded meeting of the WPK Central Committee and KPA WPK Committee at the April 25 House of Culture in Pyongyang (Photo: Rodong Sinmun).

Kim Jong Un (Kim Cho’ng-u’n) “guided” an expanded joint meeting of the Workers’ Party of Korea [WPK] Central Committee and the Korean People’s Army [KPA] WPK Committee at the April 25 House of Culture in Pyongyang on February 2 (Tuesday) and February 3 (Wednesday).  Attending the meeting were members and alternate (candidate) members of the WPK Central Committee, members of the KPA WPK Committee and observing the meeting were party guidance cadres of government ministries, commissions, provincial and local governments, and KPA officials.

View of the platform of the expanded joint meeting of the WPK Central Committee and KPW WPK Committee held at the April 25 House of Culture on February 2 and February 3, 2016 (Photo: Rodong Sinmun).

Prior to formally opening the meeting, Jong Un “noted that it is the first time in the history of the WPK” to hold a joint meeting of the Party Central Committee and the KPA WPK Committee.

According to KCNA, the meeting “had an in-depth discussion on the principled issues arising in further strengthening the WPK into the glorious party of President Kim Il Sung (Kim Il-so’ng) and leader Kim Jong Il (Kim Cho’ng-il) as required by the developing revolution on the occasion of the 7th WPK Congress [Party Congress] to be recorded as a new landmark in the history of the Party.”  The discussion at the two-day meeting “criticized mainly the practices of seeking privileges, misuse of authority, abuse of power and bureaucratism manifested in the party and proposed tasks and ways for thoroughly overcoming them.”

View of participants and venue at an expanded meeting of the WPK Central Committee and KPA WPK Committee (Photo: Rodong Sinmun).

A report and speeches at the meeting noted that it “is a historic event in further developing the WPK into the powerful political staff of the So’ngun (military-first) revolution and a motherly Party sharing its fate with popular masses and consolidating the integrated whole of the Party and the people as firm as a rock true to the leadership of Kim Jong Un.” 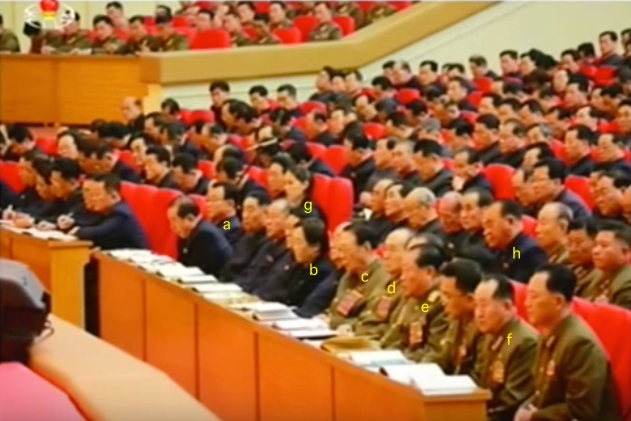 Kim Jong Un delivered concluding remarks.  According to KCNA he said that “the meeting is of weighty significance in further strengthening the Party organizationally and ideologically, rallied close around its Central Committee with one thought and purpose, with the whole party moving as one under its monolithic leadership.”  Jong Un “set forth the tasks and ways for intensifying the work to imbue the whole society with Kimilsungism-Kimjongilism and thoroughly establishing the monolithic leadership system of the Party.”  He said that “our revolutionary faith will grow stronger as our revolution which started with struggle and advances with it is faced with manifold difficulties and ordeals.  Nobody in the world can block our way.”