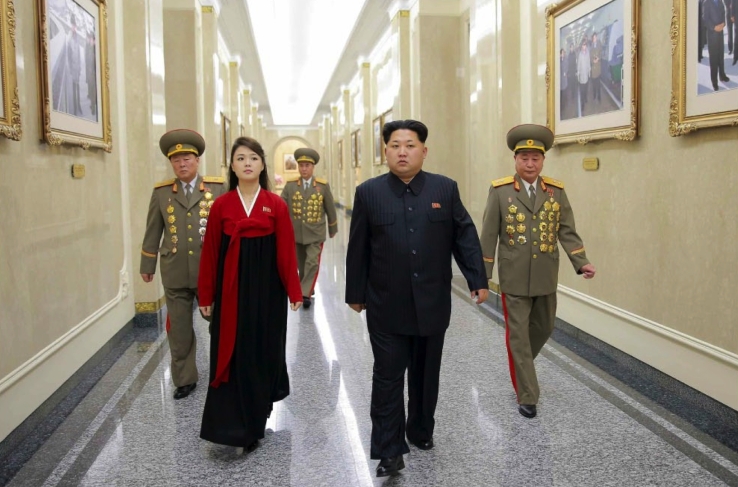 Jong Un visited a chamber in which KJI’s preserved remains lie in state.  Jong Un and Ri Sol Ju bowed “in the humblest reverence.”  He “recollected with deep emotion the noble revolutionary career and immortal exploits of Kim Jong Il who devoted his all to the sacred cause for the prosperity of the country and the happiness of the people.”  Jong Un also “made a firm pledge to certainly win the final victory of the revolutionary cause of Chuch’e by conducting all state affairs as intended by Kim Jong Il and the way as he did, true to his behsts on making the world look up to the great Party and Kim Il Sung’s (Kim Il-so’ng’s) Korea.”

Kim Jong Un’s visits Ku’msusan are a good opportunity to see what leadership institutions the Suryo’ng wishes to emphasize in state media (the WPK Political Bureau vs. senior KPA commanders) and which senior officials have retained their positions and which have fallen by the wayside.  This year, for the Day of the Shining Start, Kim Jong Un appears to be emphasizing his sole, monolithic leadership by only being accompanied to Ku’msusan by his wife.  He also eschewed the usual ceremony and honor guard and paid his respects to his father with his wife.

An image from his July 2014 visit to Ku’msusan, to commemorate the 20th anniversary of the death of his grandfather, highlights some of the personnel changes that have occurred in the KPA high command.

The distinct trend is that all but one of these personnel changes involve senior officials from the KPA General Staff apparatus, which contains the North’s conventional armed forces, while the KPA General Political Department, which contains the KPA’s political personnel involved in indoctrination, political education and surveillance, was unaffected.