Kim Jong Un addresses personnel involved in the launch of the Kwangmyo’ngso’ng-4 at the Mansudae Assembly Hall in Pyongyang on February 17, 2016 (Photo: Rodong Sinmun).

Kim Jong Un (Kim Cho’ng-u’n) presided over a state awards ceremony and had a commemorative photo session with personnel involved in the February 7 launch of Kwangmyo’ngso’ng-4 [KMS-4] in Pyongyang on February 17 (Wednesday).

The awards ceremony took place at Mansudae Assembly Hall during Wednesday morning and afternoon.  Jong Un formally opened the ceremony.  In his speech he said that “space conquerors who demonstrated the self-esteem and authority of our great state and indomitable mettle of the strong people over the world were the best patriots and admirable heroes of Chuch’e Korea.”  He noted “that great success of the satellite launch is a crystal of intense loyalty to the party, ardent patriotism and sweat of the scientists of Chuch’e Korea” and that, “our party values patriotism of the scientists loyal to the party and revolution.”  On behalf of the WPK, he “extended gratitude once again to space conquerors  who instilled sure conviction and courage into the service personnel and people of the DPRK rushing forward like the wind toward the 7th Congress of the Workers’ Party of Korea and made distinguished contributions to implementing the behests of Kim Jong Il (Kim Cho’ng-il).” 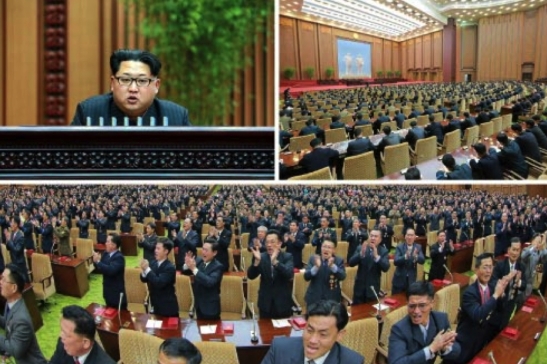 Kim Jong Un addresses a state awards ceremony for personnel involved in the launch of the Kwangmyo’ngso’ng-4 (Photos: KCNA/Rodong Sinmun).

Kim Jong said that “conquering space is not just the path of science but that of revolution, independence and self-sustenance and the drive for defending the leader and upholding the party’s policies to implement the behests of the great leaders and a fierce class struggle against the hostile forces seeking to usurp our peace and sovereignty.”  Jong Un “underscored the need to successfully launch more work satellites of Chuch’e Kore faster by conducting a dynamic campaign of intelligence and drive of breaking through the cutting edge as demanded by new era of Ch’o’llima and Mallima in order to more dynamically pave a wide avenue to occupying space.”

He “called upon the space science field to hold high the banner in glorifying the 7th Congress of the Workers’ Party of Korea as the one of victory and glory” and “set forth concrete tasks and ways of doing so.”  Jong Un “underscored the need to hold fast to Kim Jong Il’s behests as the important guidelines, unconditionally and thoroughly implement them without an inch of deflection and concession and thus glorify forever the immortal feats he performed in building space power, thoroughly establish the party’s unitary leadership system and give full play to the indomitable Kunja-ri spirit and revolutionary spirit of self-reliance.” Kim Jong Un said that “the advance toward space, the motive force of science and technology of future and economic development is the DPRK’s strategic goal” and called for “pushing forward the space development according to the five-year plan for national space development.”

After Kim Jong Un’s remarks, a Supreme People’s Assembly decree was read.  After this, Jong Un gave out the Order of Kim Jong Il, DPRK Hero, Gold Star medal and Order of the National Flag 1st Class to personnel involved in the KMS-4 launch.  Also presented, the KJI Prize, gold watches inscribed with KJI and KIS’ names, KJI Youth Honor Prize, People’s Scientist and citations from Jong Un in his capacity as WPK Secretary and KPA Supreme Commander, respectively, were handed out along with other state and party orders and medallions. 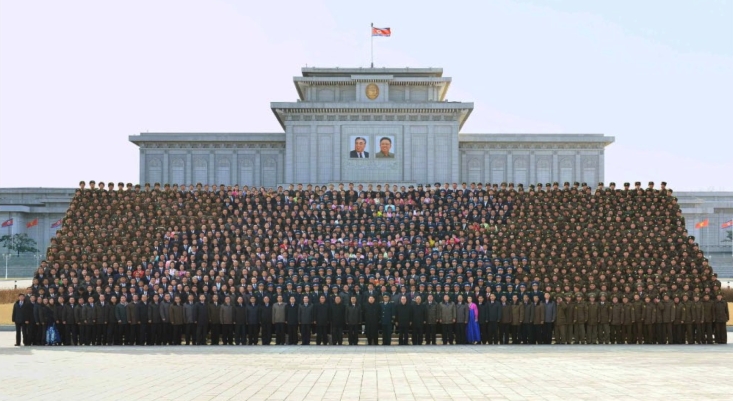 Kim Jong Un and personnel involved in the Kwangmyo’ngso’ng-4 rocket launch pose for a commemorative photo outside Ku’msusan Memorial Palace of the Sun in Pyongyang on February 17, 2016 (Photo: Rodong Sinmun).

Kim Jong Un later attended a commemorative photograph session with KMS-4 personnel at Ku’msusan Memorial Palace of the Sun in Pyongyang..  In attendance with him were Ri Man Gon (Director of the WPK Machine-Building Industry Department) and Pak To Chun (immediate past WPK Secretary for Machine-Building [Defense] Industry).

According to KCNA, Jong Un “congratulated the space conquerors who contributed to significantly celebrating the February spring holiday by launching the satellite shining with the august name of leader Kim Jong Il into the space and provided the people turning out as one toward the glorious May with the laurel of victory.”  After the photos were taken Jong Un waved at the KMS-4 personnel and he “expressed expectation and belief that the participants would bring about uninterrupted miracles and innovations in the researches for the development of the nation’s space science and technology and discharge their duty as pacesetters and standard-bearers in carrying out the party’s policy of attaching importance to science and technology.”