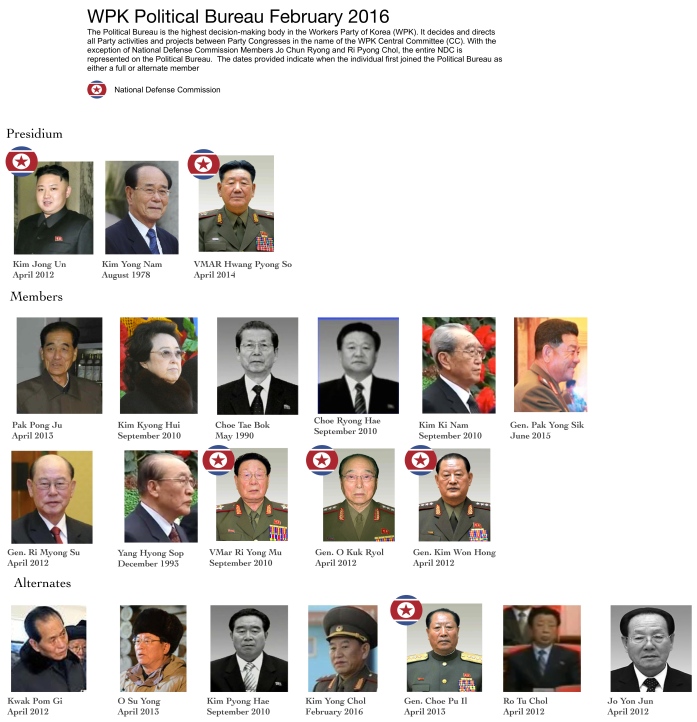 DPRK state media reported on February 24 (Wednesday) that a meeting of the Workers’ Party of Korea [WPK] Political Bureau convened on an undisclosed date to declare a 70-day “speed battle” (soktojo’n) in the run up to the 7th Party Congress in May and to organize “a headquarters” to implement the campaign.  Attending the Political Bureau’s meeting were members and alternate (candidate) members of the Political Bureau, chief secretaries of WPK provincial committees, chairs of provincial people’s committees, leading cadres and functionaries of the WPK, security organizations, workers’ and social organizations, and the DPRK government.  The letter initiating the 70-day labor campaign was read by Kim Yong (Supreme People’s Assembly [SPA] Presidium President and “urged the party members to become best core elements in safeguarding the leader and enthusiastic vanguard fighters remaining loyal to his intention and cause in the van in the ongoing struggle to glorify the 7th Party Congress as the one of victors.”

Among the agenda items in front of the Political Bureau was a letter from the WPK Central Committee “calling upon all the party members to dynamically advance in the van of the grand revolutionary march to achieve the biggest successes and labor feats” and which said that “great changes have taken place in the people’s destiny and life and the country has advanced through years of changes and miracles at the step of fresh leap with the Party’s congresses as watershed along with the 70-odd-year glorious history of the WPK.  Now that the U.S. imperialists and their followers are making a last-ditch attempt to stifle our socialism, all the party members should devote themselves to the party and the revolution to usher in a golden age in building a thriving nation, and this will eloquently prove the greatness of the Party’s leadership and demonstrate our might and the justice of our cause.”

The letter also said that “all party members should become genuine revolutionaries who faithfully serve the people in the struggle to glorify this year in which the Seventh Congress of the Workers’ Party of Korea is to be held as the greatest heyday witnessing hurrah for the Workers’ Party resounding far and wide.  The master key to achieving successes in the struggle to greet the Seventh Party Congress with great victory is in the hands of officials.”  The letter urged “all party organizations to conduct organizational and political work in an offensive manner to arouse the masses to the drive for ushering the greatest heyday in building a thriving nation with the Seventh Party Congress as momentum.” The WPK Central Committee “ardently called for waging the 70-day campaign of loyalty with the approach of the historic Seventh Party Congress” and “underlined the need for all party members to emerge as honorable victors in the campaign.”

The “speed battle” has been a characteristic of Kim Family leadership in the DPRK since the 1970s.  This is separate from the Ch’o’llima post-war reconstruction efforts or other “work harder” campaigns.  Rather the “speed battle” is a determined period of time involving ideological indoctrination, tightened social controls and the mobilization of the population to complete infrastructure projects and increase industrial and commercial output.  The last declared speed battles happened during 2009.  The “70-day labor campaign” declared on Wednesday by the Political Bureau harkens back to the 70-Day Battle which began in October 1974.  Following late DPRK leader Kim Jong Il being identified as hereditary successor that February, KJI said that the speed battle was “the basic form of a battle for socialist construction” and led the speed battle that began that October.  Speed battles were also declared during the 1980s giving rise to the ideological slogan “Pyongyang Speed.”