On February 13, Kim Jong Un (Kim Cho’ng-u’n) “issued an order to raise the military ranks of commanding officers of the KPA [Korean People’s Army] in the run-up to the birth anniversary of leader Kim Jong Il (Kim Cho’ng-il).”  According to KCNA in the promotions order, Jong Un “expressed belief that the commanding officers of the KPA would fulfill their responsibilities and duties in the honorable struggle to bring earlier the final victory of the revolutionary cause of Chuch’e as early as possible, always bearing in mind the behests of President Kim Il Sung (Kim Il-so’ng) and Kim Jong Il.”

Some of the military and Korean People’s Internal Security Forces [KPISF] officers listed below have been demoted since Kim Jong Un assumed power and are now seeing their previous ranks restored.  This happened last year when Jong Un issued military promotions for KJI’s birth anniversary.  One such name is that of Ho Yong Ho, whose name interestingly appeared on the same September 28 2010 promotions list that elevated Jong Un to general (and included Choe Ryong Hae, Kim Kyong Ok and Kim Kyong Hui).  Ho Yong Ho has close ties to General Ri Myong Su, who was appointed Chief of the KPA General Staff last week.

Also, of note, is that among the people promoted to the rank of Major General is Kim Jong Chol, who might be Jong Un’s older brother.  Kim Jong Chol appeared on the state funeral committee for Ri Ul Sol back in November 2015.  The promotions were:

Since formally assuming power during 2011 to 2012 (he became KPA supreme commander in October 2011), Kim Jong Un has issued 204 promotions for general-grade officers  These are military promotions publicly disseminated through state media and do not include undisclosed promotions of officers were appointed to senior command positions  or the “demotions by shoulderboard” (see below).  During 2015 and thus far in 2016, Jong Un has only issued promotions orders on his father’s, Kim Jong Il’s, birthday.  The upcoming 7th Party Congress might come with promotion orders.  Two military promotions lists (one of which included Kim Jong Un) were released by DPRK state media in the hours prior to the convocation of the 3rd Party Conference on September 28, 2010.  These lists, it should be noted, were not explicitly linked to the party conference, but “the occasion of the 65th anniversary of glorious Workers’ Party of Korea.”

KPA promotions of general-grade officers from 2012 to 2016 break down as: four (4) promotions to Vice Marshal; four (4) to General; six (6) to Colonel-General; 51 to Lieutenant General; and 118 to Major General.  The 2016 KJI Birthday Promotions list follows the same practice as the one which appeared in 2015 which identifies the KPA service branch or internal security ministry in which the promoted officer services.

As Against KJI Promotions

As of late February 2016, Kim Jong Un has issued more promotions than Kim Jong Il; from 2012 to 2016 Jong Un has issued 204 promotions; from 1995 to 1998 KJI had issued 172 promotions.  During 1995 to 1999, KJI promoted 251 generals.  Kim Jong Un also follows the practice of KJI in issuing one consistent promotion of general-grade officers on his father’s birthday in mid-February; KJI’s one consistent promotions orders were issued on his father’s, Kim Il Sung’s, birthday in mid-April.  However, Kim Jong Il also issued irregular promotions orders on other DPRK holidays anniversaries such as the 40th anniversary of Victory (armistice) in the Fatherland Liberation War (Korean War) in July 1993, the 50th anniversary of the Workers’ Party of Korea in October 1995, his own birthday in February 1997, the 50th anniversary of the Victory in the Fatherland Liberation War in July 2003, Army Day in April 2010 and the 65th anniversary of the WPK in September 2010.

Thus far, Kim Jong Un has issued five irregular promotions: on Kim Il Sung’s 100th birth anniversary (and these were Vice Marshal’s promotions which are effected by the National Defense Commission [NDC] and the WPK Central Military Commission [CMC]), his own honorific Marshal promotion and the elevation of Hyon Yong Chol in July 2012 (again, effected by the NDC and CMC), a one-off re-promotion of Minister of People’s Security Choe Pu Il in June 2013, the April 2014 promotion of VMar Hwang Pyong So and a promotions order in July 2014 that included Vice Chief of the KPA General Staff and 2nd revolutionary generation military elite O Kum Chol.

An overwhelming majority of Jong Un’s promotions of KPA generals have been to the ranks of Major General (118) and Lieutenant General (51).  Steph Haggard’s earlier examination of KPA general officers’ from 1997 to 2013 found a vast majority of promotions were of Major Generals.  The promotion to Major General is an entry ticket into the general-grade officers’ cohort within the KPA, raising officers from the rank of senior colonel.  The high number of Major General promotions are, first, a tool of patronage (of treating KPA officers with carrots, not sticks).  The Supreme Commander is bringing the officer into the fold of the upper ranks, vesting him (or her) with prestige as well as the pecuniary and social welfare benefits that come with a general’s star.  Second, the promotions to Major General indicate a generational change within the military.  While most Major Generals will hold their ranks for at least five years before attaining another promotion, this is a population which will eventually rise to corps command positions and eventually to the high command.

The second-highest number of promotions under Kim Jong Un have been to the rank of Lieutenant General.  Lieutenant Generals have had a special place of prominence under Kim Jong Un that was previously enjoyed by three star Colonel-Generals under KJI–they are corps- and division-level commanders and are holding deputy director and vice ministerial positions within the KPA General Political Department and Ministry of People’s Armed Forces apparatus.  Because Kim Jong Un has appointed Lieutenant Generals to positions in the second tier of the KPA high command, this is population to watch both for future personnel appointments to the 1st tier of the high command and also to see who is rotated from the corps-level into the high command. 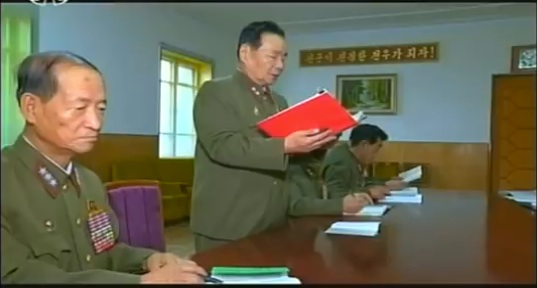 A lot of Pyongyang watching energy has been expended on the cycle of dismissals, disappearances and executions of senior members of the KPA high command.  Part of this peculiar dynamic, which is rarely discusses, has been Kim Jong Un’s unannounced demotions and re-promotions of these senior KPA officials.  This is why any assessment of Jong Un’s general-grade officers’ promotions will yield an incomplete picture of officers’ rankings.  The “demotion by shoulder board ” practice is also difficult to track and it involves close scrutiny of DPRK state media to find the number of stars that appear on a given general’s epaulettes (a four star general is observed with the three stars of a Colonel-General, etc.) to see if s/he has been demoted.  Often the rank is eventual restored, or re-promoted.

Like the shake-ups to the high command, which started in February 2009, the demotion of senior KPA officials also began when Kim Jong Il was alive and still in power.  It was first observed in January 2010 when former director of the KPA General Staff Operations Bureau Kim Myong Guk was observed holding the rank of Colonel-General at a field inspection attended by KJI and Jong Un.  The next month, General Kim saw his fourth star restored.