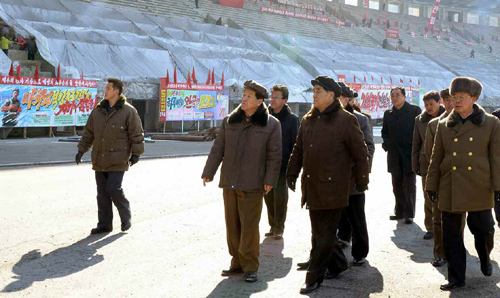 DPRK state media reported on February 25 (Thursday) that Premier Pak Pong Ju visited the renovation of the Kim Il Sung (Kim Il-so’ng) Stadium in Pyongyang, the Ch’o’ngsan Cooperative Farm in the Kangso’ District of the Namp’o and the Sep’o stockbreeding zone in Kangwo’n Province.

Pak Pong Ju toured the renovation of the Kim Il Sung Stadium and “called for qualitatively renovating the stadium and supplying a sufficient amount of materials necessary for the project.”  He also inspected Ch’o’ngsan Cooperative Farm in Namp’o, where KIS launched the Chongsanri method (in which agricultural managers should solve farming problems directly by talking with the workers and conducting regular field surveys; the DPRK Premier’s inspection tours practice Ch’o’ngsanri at a macro level).  Pak “underscored the need for the agricultural workers of the farm to direct efforts to making the preparations for the year’s farming and increase per-hectare grain yield by introducing scientific farming methods.”

He toured the Sep’o stockbreeding area where, according to KCNA, he “encouraged the builders who are registering successes in carrying out projects and improving the the land in order to greet the 7th Congress of the Workers’ Party of Korea with shining labor successes.”  A meeting to consult with managers, functionaries and employees discusses “measures for supplying materials to successfully push forward the projects and matters arising in cultivating grass of good species such as ‘Aegukpul’ and remarkably increasing the livestock products by putting livestock breeding on a scientific and technical basis.”  The joint slogans released by the WPK Central Committee and WPK Central Military Commission in the run up to the 7th Party Congress referred to the Sep’o area (“Step up the construction of the stock-breeding base in Sep’o area and bring about a new turn in developing poultry and livestock farming!”) and the planting of grass (“Let’s massive plant Aeguk Grass!”).