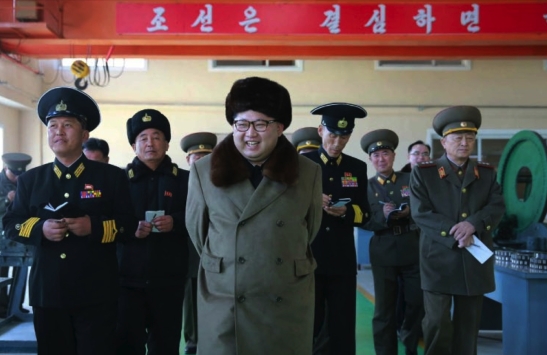 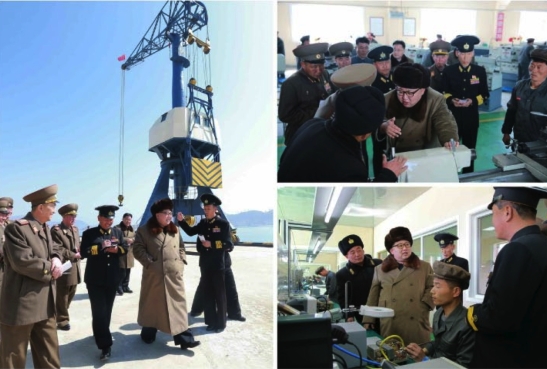 He said that the renovated factory had “been so drastically face-lifted that its appearance last year could no longer be found” and “an icon and standard in the nation’s field of ship repair.”  He toured rooms depicting the factory’s institutional and revolutionary histories and noted that “the factory today would be unthinkable without the meticulous guidance and care of President Kim Il Sung (Kim Il-so’ng) and leader Kim Jong Il (Kim Cho’ng-il).”  He underscored “the need for the factory to effectively conduct education in the exploits performed by the great leaders and the Party among its employees through the successfully built room for the education in the revolutionary history and room dedicated to the history.”

Kim Jong Un is briefed about the renovation and production at the October 3 Factory (Photos: Rodong Sinmun/KCNA).

Jong Un remarked that a “clear line of distinction between the area for production and that for workers’ living was draw to provide the workers with the best working and living conditions and various cultural and welfare facilities, sporting ground and dwelling houses for employees were successfully built to keep harmony with the coastal area…it looks like a health a resort.”  He issued instructions “to be implemented by the factory to manage and operate” and noted the “factory has a very important role to play in developing the Chuch’e-oriented naval force.  The remodeling of the factory as a modern one by our own efforts of which we can be proud was striking demonstration of the indomitable fighting spirit and validity of the cause of the army and people of the DPRK who are waging an offensive despite difficulties and trials while resolutely smashing the desperate moves of the US imperialists and their followers to stifle Korean socialism.”  Kim Jong Un expressed “great expectation and conviction that the officials of the factory would make positive contributions to developing the Chuch’e-oriented naval force.  The territorial waters mean national defense in Korea surrounded by the sea on three sides.” 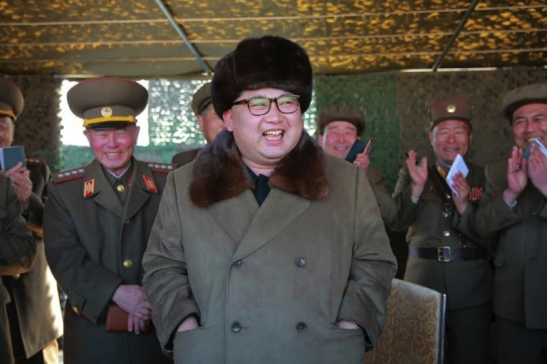 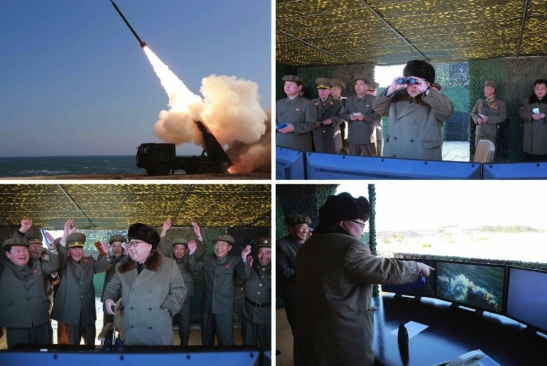 After the MLRS’ test firing Jong Un expressed “great satisfaction over the perfect accuracy of the rockets” and “highly praised once the officials, scientists and technicians in the field of defense science and munitions factories for successfully manufacturing the system which of great strategic importance in remarkably increasing the capability of the KPA to mount a precision attack on the enemies’ targets in the operational theater in the southern party of Korea.”

Kim Jong Un also expressed “great expectation and belief that they would bring the greatest heyday in the development of national defense science this year when the Seventh Congress of the WPK is to be held steadily intensifying the work for developing new Chuch’e-based weapons of Korean style, true to the WPK’s idea of attaching importance to national defense science and technology.”  He posed for a commemorative photograph with the cadres, scientists and technical personnel involved with the test firing.