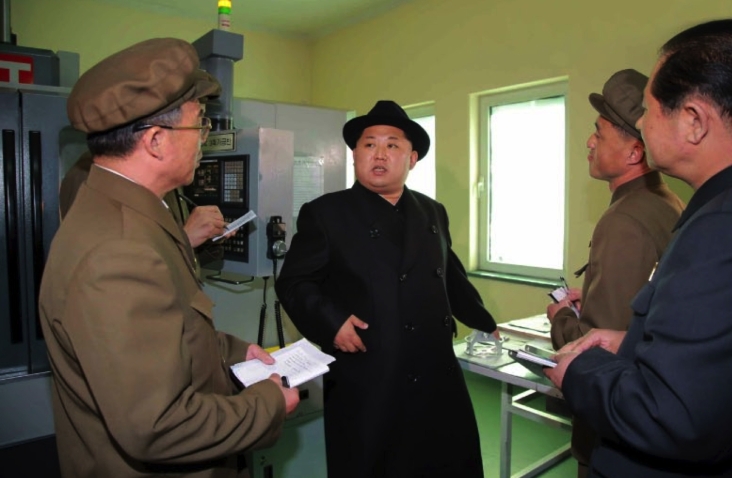 According to KCNA the machine plant was “built in 2013 thanks to the initiative and energetic leadership of Kim Jong Un” and “is associated with the leadership feats of him who is working heart and soul to develop the machine-building industry of the country as required by the new century.”  Whilst “giving several field guidance to the plant built to meet the requirements of the age of knowledge-based economy and a highly civilized socialist country” Kim Jong Un “set forth a task of developing ultra-modern precision machines and took a measure for doing so.”

Jong Un toured the revolutionary history museum, processing, assembly, the e-library and other parts of the machine plant.  He remarked that it was “not long since the plant went operational, but a lot of work has been done” and “praised it for having made remarkable achievement in the work to increase the variety of machines and improve their quality.  The machines produced at the plant are profusely paying off in various fields of the national economy.  The key to this success lies in the fact that the plant attached importance to science and technology and closely combined scientific researches with production as intended by the party.”  Jong Un noted that “the plant is effectively operating the modern e-library provided by the party, thereby successfully conducting the work to fully equip its employees with the latest science and technology and broaden their horizons.”

He said that “the plant has a very important duty and role to play in building a prosperous country” and issued “tasks to be fulfilled by the plat” and “instructions for improving the business management and operation as required by the developing reality.”  Jong Un said that by “going around the plant he learned well about the very high enthusiasm of its workers who have turned out in the drive for greeting the Seventh Congress of the Workers’ Party of Korea with unprecedented labor successes” and stressed “the need to give fuller play to their mental power so they may emerge honorable victors in the 70-day campaign of loyalty.”