Overview of a central report meeting marking the 4th anniversary of Kim Jong Un’s appointment to the positions of 1st Secretary of the WPK and 1st Chairman of the NDC, held at the People’s Palace of Culture in Pyongyang on April 11, 2016 (Photo: Rodong Sinmun). 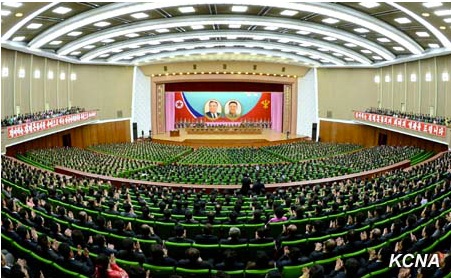 View of the venue of the central report meeting marking the 4th anniversary of Kim Jong Un’s appointment to the positions of 1st Secretary of the WPK and 1st Chairman of the NDC, held at the People’s Palace of Culture in Pyongyang on April 11, 2016 (Photo: KCNA).

Participants at a meeting commemorating the 4th anniversary of Kim Jong Un’s appointment to the positions of 1st Secretary of the WPK and 1st Chairman of the NDC, held at the People’s Palace of Culture in Pyongyang on April 11, 2016 (Photo: Rodong Sinmun).

Kim Ki Nam presided over the meeting and VMAR Hwang Pyong So delivered the report.  According to KCNA, Hwang said in his report:

Holding Kim Jong Un in high esteem as first secretary of the WPK and first chairman of the National Defense Commission of the DPRK was a special event as it opened a new history of great prosperity on the road of the party, the country and the nation and a grand revolutionary event.

Having Kim Jong Un at the top posts of the party and the state helped give steady continuity to the lifeline of the Chuch’e revolution, So’ngun (military-first) revolution and eternally preserve the revolutionary character of the party and state as the great ones of President Kim Il Sung (Kim Il-so’ng) and leader Kim Jong Il (Kim Cho’ng-il) and provided a guarantee for sure victory of the general advance in the new century of Chuch’e.

Kim Jong Un is an iron-willed commander who has consolidated the self-reliant defense capability in every way with his invincible So’ngun (military-first) revolutionary leadership and reliably protected the dignity and sovereignty of the country and the nation.

After setting it as the general duty for army-building to model the entire army on Kimilsungism-Kimjongilism, he advanced original ideas and theories for army-building such as the four-point line of strengthening the army and remarkably developed the KPA into a powerful treasured sword for safeguarding the country, the revolution and the people.

Under his guidance the revolutionary armed forces of the DPRK have grown to be revolutionary army of the party firmly based on the party’s monolithic command system, an ideologically and morally strong army fully equipped with the revolutionary faith of Mt. Paektu and the spirit of the red flag and an elite matchless army having ultra-modern striking means.

He initiated the movement for becoming crack shots and personally organized and commanded various operations and combat trainings to make sure that the entire army intensified the military training the way the anti-Japanese guerrillas did in Mt. Paektu so that all service personnel are trained as stalwart fighters capable of waging modern warfare, possessed of Kim Il Sung‘s and Kim Jong Il‘s strategy and tactics, heroic fighting spirit and perfect capability to fight an actual war.

He laid down the new line of simultaneously developing the two fronts and energetically led the work for steadily making the defense industry more Chuch’e-oriented, modern and scientific and developing and producing more diverse and powerful weapons and equipment of Korean-style, thereby further consolidating the material and technical foundation of self-reliant defense capability.

The DPRK emerged the strongest nuclear power possessed of even H-bomb. This is one of the greatest feats he performed for the country and nation and for the victory of the Chuch’e revolution and the people’s cause of independence.

He is the great statesman and great master of leadership as he provided a new springboard for building a great thriving nation by ushering in a new great era of creation and changes with his distinguished political caliber and tested and seasoned leadership.

Let all party members and service personnel and people to firmly protect Kim Jong Un politically and ideologically and with their lives and single-mindedly remain loyal to him with the national pride of having the peerlessly great man at the top posts of the party, state and army.

All service personnel and people will never tolerate the reckless provocations of the U.S. imperialists and their followers to block the advance of the DPRK and stifle its ideology, cause and socialist system but resolutely foil them by dint of justice and wage a positive struggle for the independent reunification of the country, global peace and security and the cause of human independence.

Let all the service personnel and people to wage an all-out charge to glorify the Seventh Congress of the WPK with high political enthusiasm and unprecedented labor achievements and bring earlier the final victory of the revolutionary cause of Chuch’e and future of a reunified thriving nation, united close behind Kim Jong Un.