The Pyongyang WPK City Committee Party Conference held at the People’s Palace of Culture in Pyongyang on April 19 and April 20, 2016 (Photo: KCNA)

The Pyongyang City Workers’ Party of Korea [WPK] Committee held its party conference (tangdaep’yohoe) at the People’s Palace of Culture on April 19 (Tuesday) and April 20 (Wednesday).  Pyongyang is a directly-governed city so this gathering was the same as a provincial party conference.  Attending the party conference were delegates (party representatives) elected from Pyongyang’s basic party organizations and from various national institutions.

The party conference elected its executive committee and was briefed about the activities and work of the Pyongyang WPK Committee.  A report said that Pyongyang’s party committee “has further consolidated the unity and cohesion of the party centered on the leader and established the steel-strong discipline of receiving the party’s policies without any condition and thoroughly implementing them in the court of regarding it as the main principle of party building to establish the party monolithic ideological system and monolithic leadership system and thoroughly applying it.”  The report also referred “to the tasks for further strengthening the party work as required by the developing reality when the revolutionary cause of Chuch’e enters its leaping stage and thus accelerating the modeling of the whole society on Kimilsungism-Kimjongilism.”  Party conference speakers discussed the 70 Day speed battle, developments at the Kim Jong Suk Textile Mill, the Pyongyang 326 Electric Wire Factory and civic projects, among other topics. 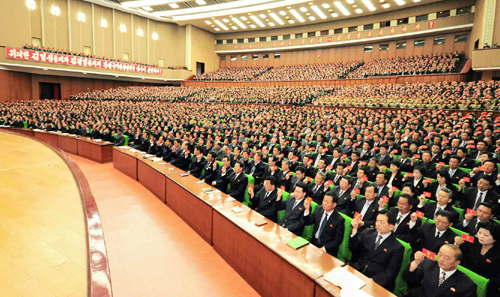 Kim said that Kim Jong Un’s election “serves as an expression of absolute trust and profound loyalty of all the party members and people in the city”.  Other speakers expressed “their determination to dynamically advance under the leadership of the party” and said they “are firmly convinced that final victory of the Chuch’e revolution is certain as they hold Kim Jong Un in high esteem.”  Jong Un’s nomination was unanimously approved and followed by the election of delegates and observers representing Pyongyang to the 7th Party Congress.