SPA Presidium President Kim Yong Nam places a floral bouquet at the foot of an icon of Kim Il Sung and Kim Jong Il at Kim Cho’ng-t’ae Electric Locomotive Factory in Pyongyang as part of celebrations of International Labor Day on May 1, 2016 (Photo: Korean Central TV).

WPK Secretary and SPA Chairman Choe T’ae Bok is briefed about the use of wind power at the State Academy of Sciences in P’yo’ngso’ng, South P’yo’ngan Province on May 1, 2016 (Photo: Korean Central TV). 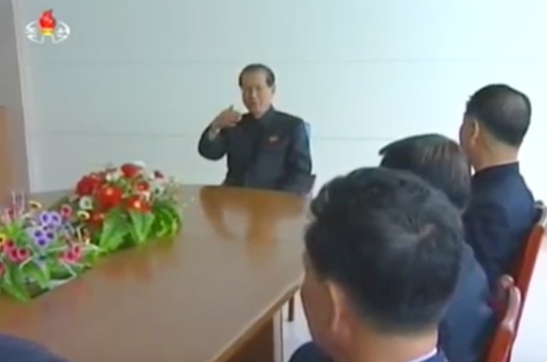 WPK Secretary for Science and Education Choe T’ae Bok speaks with researchers at the State Academy of Sciences in P’yo’ngso’ng, South P’yo’ngan Province on May 1, 2016 (Photo: Korean Central TV).

View of a footrace held at the development of the Sep’o Stockbreeding Zone in eastern DPRK as party of International Labor Day events at work sites and production units (Photo: Korean Central TV). 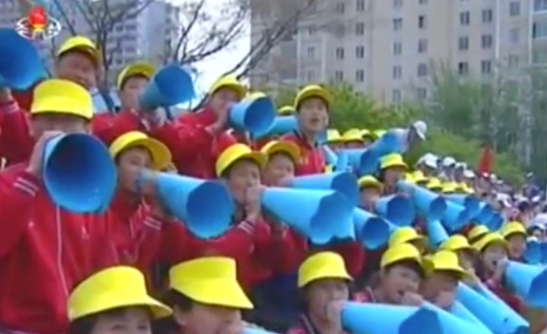 Senior leadership presented floral baskets and bouquets in front of statues, mosaics and icons of Kim Il Sung (Kim Il-so’ng) and Kim Jong Il (Kim Cho’ng-il) in tribute to the late leaders.  They met managers and employees at the work sites, watched performances of art propaganda squads and officiated over and participated in a variety of games and sports activities.  According to KCNA they “requested all working people to fully display the spirit and mettle of working people of So’ngun (military-first) Korea in bringing earlier the final victory of the great Paektusan (Mt. Paektu) nation.”

View of participants at an International Labor Day (May Day) nation meeting held at Kim Cho’ng-suk Silk Mill in Pyongyang on May 1, 2016 (Photo: KCNA).

View of participants at an International Labor Day (May Day) nation meeting held at Kim Cho’ng-suk Silk Mill in Pyongyang on May 1, 2016 (Photo: Korean Central TV).

DPRK Premier Pak Pong Ju delivers the report at a national meeting to mark International Labor Day at the Kim Jong Suk Silk Mill in Pyongyang on May 1, 2016 (Photo: KCNA).

Pak Pong Ju delivered the report in which he said:

Upon the authorization of Marshal Kim Jong Un (Kim Cho’ng-u’n) the premier congratulated the working people across the country on May Day.

The glorious history of the Korean revolution is shining as the proud years in which the working people have successfully discharged their noble mission and duty in the work to carry out the cause of the Chuch’e revolution and socialism under the guidance of the great leaders.

President Kim Il Sung (Kim Il-so’ng), who embarked upon the road of revolution in his early years, put forward broad strata of popular masses including the workers, peasants and intellectuals as the masters of not only their destiny but the revolution under the banner of the Chuch’e idea and ushered in the Chuch’e era, a new era of history in which the independence of the masses was achieved by enlisting their inexhaustible might.

Leader Kim Jong Il (Kim Cho’ng-il) closely rallied the working class and other masses around the party and wisely led to victory them in their cause of independence and socialism by dint of single-minded unity.

The history of the great leaders’ sacred revolutionary guidance is given steady continuity by Marshal Kim Jong Un (Kim Cho’ng-u’n).

Working people exist in any part of the world but none of them are leading such a worthwhile and proud life as the working people in the DPRK demonstrating the independent dignity as human beings under the care of the peerlessly great men.

The working people should turn out as one in the drive to step up production and construction and bring earlier the final victory in the confrontation with the U.S., each taking a rifle in one hand and a hammer or sickle or writing brush in the other with the will to annihilate the U.S. imperialists and south Korean puppet group running amuck with reckless nuclear war drills against the DPRK to have the sun of So’ngun (military-first), which represents the life and destiny and bright future of all Koreans, eclipsed.

The Korean working people will as ever boost the solidarity with the working people all over the world in their struggle to oppose exploitation and oppression by capital and achieve genuine democratic right and social progress and will fulfill their mission before history to achieve prosperity common to humankind in the idea of independence, peace and friendship.