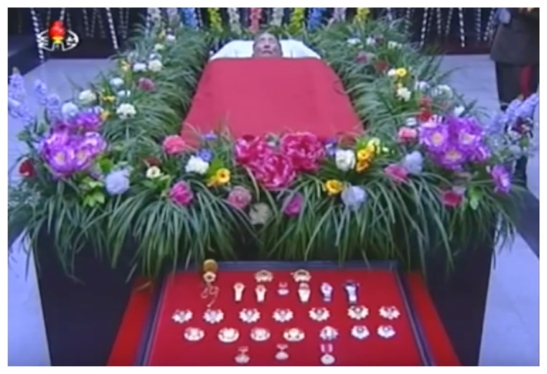 View of the casket and a display of the state awards, titles and commemorative watches Kang Sok Ju was given during his career (Photo: Korean Central TV).

Members of Kang Sok Ju’s family at his funeral service at Sojang Center in Pyongyang on May 22, 2016 (Photo: Korean Central Television).

Mourners gathered at the funeral parlor at Sojang Club in the Pot’onggang District in Pyongyang where they observed a moment of silence before the cortege proceeded to the Patriotic Martyrs’ Cemetery.  Pyongyang citizens lined the street as the hearse passed by.  At the cemetery a graveside service took place at which Choe Ryong Hae and Ri Su Yong (WPK Chairman and Kang’s replacement) spoke during the ceremony.  According to KCNA, Choe said in his eulogy that that “the death of Kang Sok Ju, genuine revolutionary and able political activist, was a great loss to the WPK and the people.  Though his heart stopped nearing, the feats he performed for the party, the revolution, the country and the people will last forever.” 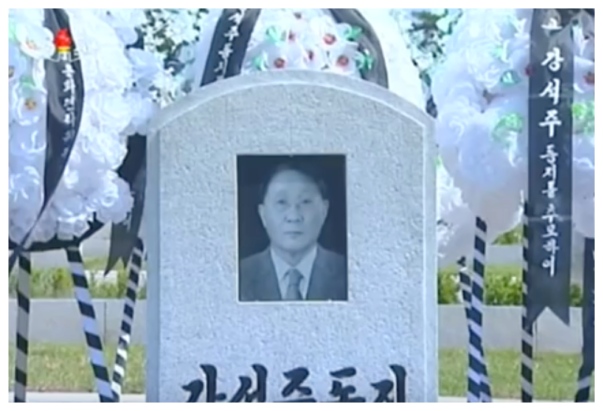 Kang’s casket was interred and members of the State Funeral Committee and members of the Kang Family placed dirt over the casket.  Floral wreaths from Kim Jong Un (Kim Cho’ng-u’n), the WPK Central Committee, the Supreme People’s Assembly [SPA] Presidium and the DPRK Cabinet were placed near Kang Sok Ju’s grave.  After, the mourners observed a moment of silence.