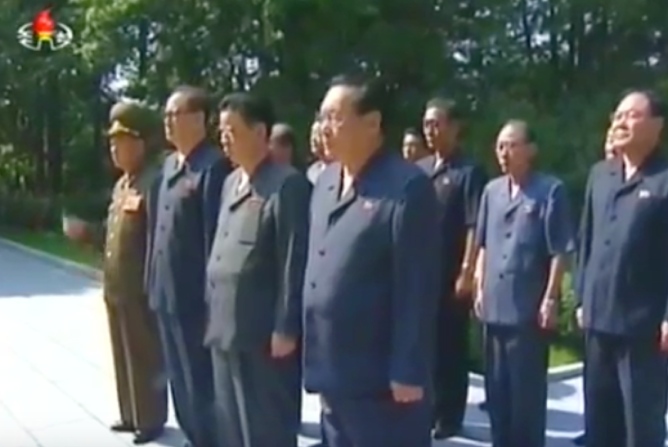 Linked to commemorations of Kim Hyong Jik’s death anniversary and was marking the 50th anniversary of the establishment of the Ponghwa-ri Revolutionary Site in Kangdong County.  Kim Hyong Jik was a school teacher at Ponghwa-ri and Kim Il Sung supposedly resided there when he was five years old.  According to the official folklore of the WPK Party History Institute, and Kim Il Sung’s own memoir With the Century, Kim Hyong Jik also led anti-Japanese revolutionary activities from Ponghwa-ri culminating in the purported founding of the Korean National Association.  According to With the Century:

By that time our family had moved from Mangyo’ngdae to Ponghwa-ri, Kangdong. There he taught at Myo’ngsin School during the daytime and enlightened the masses at night school, as he had done in Mangyongdae. He used to return home very late.

In a literary exercise at school I made a speech against the Japanese, from a composition prepared for me by my father.

In those days he composed revolutionary poems and songs and enthusiastically taught them to his pupils.

Many independence fighters visited my father at Ponghwa-ri. He himself travelled frequently around North and South P’yo’ngan Provinces and Hwanghae Province to visit his comrades. In the course of this, hardcore elements were trained and a mass foundation for the independence movement was laid.

From the day following my father’s arrest the Christians living in Ponghwa-ri gathered at Myo’ngsin School early every morning and prayed for his release.

People from Pyongyang, Kangdong and the surrounding area swarmed to the Pyongyang Police Station with petitions for his release.

On hearing that my father was soon to be put on trial, my grandfather in Mangyo’ngdae sent my uncle to the police station. He wanted to know whether my father wished to have a lawyer to defend him at the trial or not. When my uncle said that he would find the money to hire a lawyer by selling some household goods, my father flatly refused.

“A lawyer speaks with his mouth, and I can do the same. So there is no need to waste money on a lawyer. An innocent man does not need a lawyer to defend him!”

The Japanese imperialists tried my father three times at the Pyongyang local court. Each time my father protested against the trial, saying, “How can it be a crime for a Korean to love his country and work for it? I cannot recognize this unwarranted examination by the authorities.”

As a result, the trial dragged on. At the third trial the Japanese imperialists sentenced him to a term in prison.

After my father’s imprisonment uncle Hyong Rok and my second uncle on my mother’s side (Kang Yong Sok) came to Ponghwa-ri to take us to Mangyongdae.

But my mother said that she would remain at Ponghwa-ri through the winter. She wanted to remain there in order to get in touch with the members of the Korean National Association and other anti-Japanese fighters who might visit there, and to resolve any problems caused by my father’s arrest.

After dealing with all such problems my mother took us to Mangyo’ngdae in the spring of the following year. My two grandfathers came to Ponghwa-ri with a cart to carry away our household goods.

A meeting to mark the 50th anniversary of the Ponghwa-ri Revolutionary Site was held on June 5.  According to KCNA, Kim Il Sung visited Ponghwa-ri on April 10, 1966, recalled the lives of Kim Hyong Jik and his wife Kang Pan Sok and “ascertained historical materials one after another” then went on to give “field guidance to it more than 10 times to teach the principled issues arising in the preservation of the revolutionary relics.”  Kim Jong Il “made sure that the revolutionary museum was built into the base of studying the revolutionary activities of Kim Hyong Jik and the base of educating the masses and personally named it…he also went to the spot several times and solved problems arising in the work of preserving and managing the historical site.”  During the anniversary meeting a message from the WPK Central Committee to the Ponghwa-ri Revolutionary Site’s employees and managers was read, and other speeches were made. 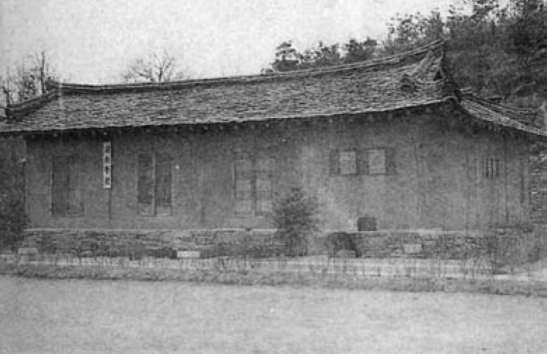 The Ponghwa-ri Revolutionary Site was established at a time when the factualization process around Kim Il Sung, the Kim Family and Kim Jong Suk was intensified in order to establish a culture of veneration around the Kim Family.  Part of this included establishing Kim Il Sung as the predominant anti-Japanese hero in North Korean political culture and tying his activities to a machinated family history of anti-imperialist actions by his ancestors and anti-Japanese activities by Kim Hyong Jik, his father.  Also ascribed to KHJ is the slogan “Aim High” which KCNA and Rodong Sinmun noted during the weekend.  According to KCNA, “‘aim high’ is an idea for calling for liberating the country by fighting through generations.”  Of Kim Hyong Jik, it said “with this idea he groped for a way to liberate the country and formed the Korean National Association, an anti-Japanese underground revolutionary organization…he demonstrated the inevitability of the proletarian revolution and advanced a policy of shifting the anti-Japanese national liberation movement from nationalist movement to proletarian revolution.” 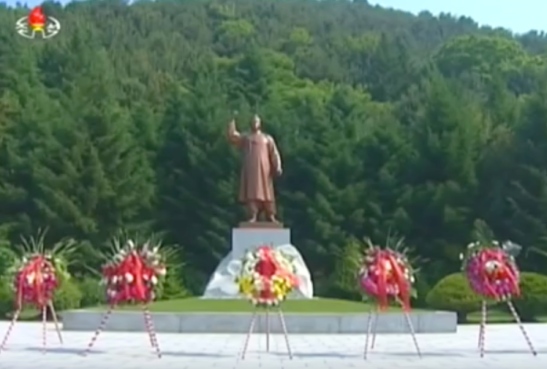 According to Kim Jong Il’s official biography, at a young age KJI received an inkstone from his grandparents and wrote out the slogan.  Later, in 1952, KJI recited the poem “Green Pine on Nam Hill,” a poem ascribed to Kim Hyong Jik which includes “aim high” (and is the Green Pine of the Green Pine Associated Corporation) for Kim Il Sung.  According to KJI’s multi-volume biography:

Kim Il Sung explained to the boy how that had been his grandfather’s life-long creed; how his grandfather had fought all his life against the Japanese imperialists to win the independence of the country, determined to achieve his aim at any cost—determined, if he failed, that his son would do it, and if his son failed, then grandson; how his grandfather, when dying, had left to his son two pistols which symbolized the motto “Aim High”, pistols with which he had organized the first armed force, declared war against the Japanese and liberated the country; and that the Korean revolution, however, was still incomplete, for the revolution would continue until Korea was reunified as an independent country and until all imperialists were swept off the face of the earth.