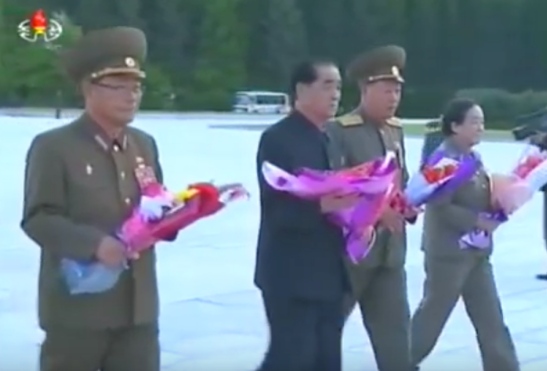 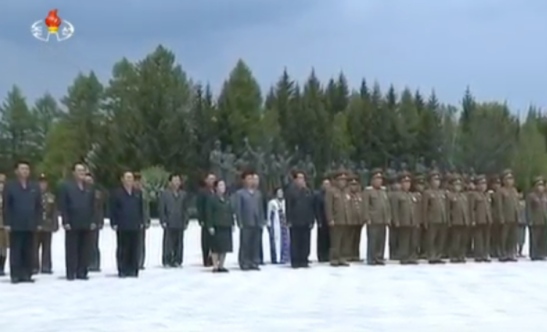 According to the official chronicles about Kim Jong Il’s life, at the age of 14 he initiated study tours of revolutionary historical sites.  The anniversary of the beginning of the Mt. Paektu study tours is linked to events commemorating the 70th anniversary of the foundation of the Korean Children’s Union; in the context of the official KJI biography he was a member of the then-Democratic Youth League and initiated these trips for DYL and KCU members:

Kim Il Sung readily supported him, saying: You would do well to go to the revolutionary battlesites along the route of the anti-Japanese guerrillas, across mountains and through forests. In those difficult days, they marched into the homeland, attacking Poch’o’nbo and fighting a battle in the Musan area. When you get there, you must learn how they fought with faith in final victory.

Kim Jong Il answered that he would heed his advice.

Kim Il Sung continued: As the Korean saying goes, being the first to open the door at dawn brings five blessings. It is not so difficult to be the first to open the door of a house. But it is no easy task to open the door of the country before anyone else, for the sake of the country and the people, the Party and revolution, and venture out on an untrodden path. That is a most honorable and worthwhile undertaking. The first ever march to revolutionary battle sites is such a venture, according to me. Set out on that untrodden path with firm resolve and you will make it through.

Greatly inspired, Kim Jong Il started organizing the march with the firm resolve to hold aloft the banner of the revolutionary tradition.

After forming the group of student marchers, he discussed with them the program of activities at meetings of the Korean Children’s Union, and helped them make the necessary preparations. Prior to their departure, he emphasized the purpose of the march, namely, to study the Party’s revolutionary traditions established by Kim Il Sung.

On June 5, 1956, the group from Pyongyang Middle School No.1 led by Kim Jong Il set out, under a red flag, on a historic tour of revolutionary battlesites, the first of its kind in Korea. This venture of teenagers created a great stir among the people.

Ma Tong Hui was an indomitable fighter who had ensured Kim Il Sung’s personal safety: He had cut off his tongue with his teeth in prison for fear that he might reveal the whereabouts of Headquarters in a delirium after being subjected to heavy torture.

After observing a moment’s silence in memory of the martyr, Kim Jong Il said: He laid down his young, 26-year-old life for the country and the people. During our current venture, we must assiduously study the revolutionary traditions and take the cue from the infinite loyalty of the anti- Japanese revolutionary forebears to Kim Il Sung.

The group reached the revolutionary battle site of Poch’o’nbo on June 8. They laid floral bouquets before the bronze statue of Kim Il Sung and bowed before it, recalling how he had instilled in the people confidence in national liberation and inspired them in the anti-Japanese war 19 years ago. They visited the poplar under which he had commanded the battle, and the sites of the destroyed Japanese police substation, fire station, sub-county office, post office and forest station. Then they posed for a photograph under a zelkova, a mute eye-witness to all the events of history.

On June 9, they left Poch’o’nbo and travelled to the banks of Lake Samji along a narrow, dense and overgrown path through the forest—a near- wilderness littered with fallen trees and covered with piles of dead leaves. They drank water from the lake by scooping it up with their hands and drank in the scenic beauty of the clusters of pink azaleas.

Kim Jong Il, surveying the thick forests around and the calm, crystal- clear water, said: The lake is so beautiful, just like a picture. It seems like it is the very source of Korea’s clear waters and crisp air.

He strolled along the lakeside as he continued:

“My mother used to tell me that at the foot of Mt. Paektu I would find a convergence of three ponds called Lake Samji, a very beautiful spot. She often talked about the break they took here after marching into the homeland under the General’s command to attack the Japanese imperialists. She said she had drunk the clear water of the lake and that its sweet taste was unforgettable. I have always felt an irresistible urge to come here, and now my wish has come true.”

He cast his glance over to Mt. Paektu, lost in tender memories.

“Mt. Paektu is my native place,” he resumed, his eyes riveted on the mountain. It was here that the leader lit the torch of the revolution, he said, it will remain standing for ever as a towering eye-witness to the history of the Korean revolution.

A while later the students left the precincts of the lake and started marching down the “Kapsan-Musan Guard Road”, after Kim Jong Il had dissuaded them from boarding a bus and appealed to them to march on foot, just as the anti-Japanese guerrillas had done. They walked with spirited strides, knapsacks on their backs, singing the Guerrilla March.

Kim Il Sung had marched along this very road in broad daylight despite a tight Japanese cordon; now, as he took the same route, Kim Jong Il again marvelled at his father’s matchless courage, brilliant tactics and faith in ultimate victory.

That night the young marchers slept in the village of the Samjiyo’n Forest Station.

The following day, on June 10, they had to set out on more than 24-km hike through steep and rugged mountains to Rimyongsu through P’o’t’ae-ri. Before leaving, Kim Jong Il checked every one of the students’ backpacks.

“Comrades, do you feel up to making it through the 24-km journey?” he asked.

“Yes,” they answered in unison.

“Once you have determination, nothing is impossible. A man receives training in body and mind by climbing mountains and enduring hardships from childhood.” 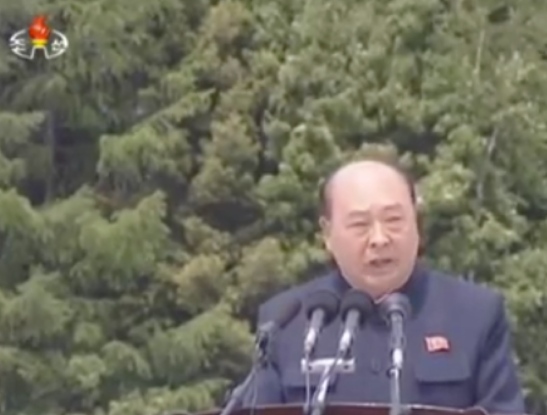 The anniversary meeting was presided over by Ri Sang Won (Chairman of the Yanggang WPK Provincial Committee), the official report was delivered by Pak Pong Ju.  He said, in part:

Kim Jong Il started the study tour of revolutionary battle sites in the area of Mt. Paektu while leading the first group for the study tour in June, Chuch’e 45 (1956). This was a historic event of great significance for carrying out the cause of the Chuch’e revolution.

The start of the study tour during the days of ordeals of the Korean revolution was a bold decision which could be made only by Kim Jong Il who regarded it as his lifetime mission to carry out the idea and cause of Kim Il Sung to the end.

The whole course of the study tour is associated with Kim Jong Il‘s firm faith and will to carry on the march started from Mt. Paektu forever.

The study tour provided an immortal landmark for carrying forward the revolutionary traditions of the WPK through generations, building the DPRK as the invincible power full of the spirit of Paektu and displaying its might before the whole world.

The glorious revolutionary traditions of the WPK founded by Kim Il Sung and firmly maintained by Kim Jong Il are being successfully carried forward and developed by supreme leader Kim Jong Un (Kim Cho’ng-u’n) on the road of advance in the new century of Chuch’e. 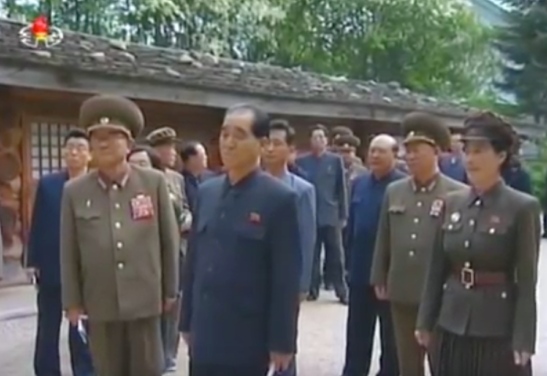 The participants at the national meeting also presented floral bouquets in front of the KIS Statue at the Samjiyo’n Grand Monument and visited the Samjiyo’n Revolutionary Museum.  They also toured KJI’s official birthplace near Mt. Paektu, then toured the historical sites in the area.  On June 5, they climbed Mt. Paektu and visited other revolutionary historical sites.