A national joint meeting of the Korean Children’s Union at Ku’msusan Palace of the Sun on June 6, 2016 (Photo: Rodong Sinmun).

A national joint meeting of the Korean Children’s Union was held on June 6 (Monday) at the plaza in front of Ku’msusan Palace of the Sun.  Attending the meeting was Choe Ryong Hae (Workers’ Party of Korea [WPK] Vice Chairman for Workers’ and Social Organizations, Member of the WPK Political Bureau Presidium and Chairman of the State Physical Culture and Sports Commission), other WPK cadres, Kim Il Sung Youth League officials and delegates to the KCU’s 70th anniversary events.  The participants paid their respects to portraits of Kim Il Sung (Kim Il-so’ng) and Kim Jong Il (Kim Cho’ng-il), then KISYL Central Committee 1st Secretary Jon  Yong Nam led the KCU members in a pledge which said:

We will hold the Generalissimos who dedicated themselves to the happiness and rosy future of the rising generation all their lives in high esteem as the eternal sun of Chuch’e for all ages and firmly defend and glorify for all ages the undying revolutionary feats they performed for the history of the Korean children’s movement.

We, bearing deep in mind that there are a worthy life and happiness and beautiful hope will be in bloom thanks to Marshal Kim Jong Un (Kim Cho’ng-u’n), will become the genuine children’s guards in the era of So’ngun [military-first] who are devotedly defending the safety and authority of the Marshal just as heroes Kim Ki Song and Kim Kum Sun of the anti-Japanese Children’s Corps and juvenile guerrillas during the Fatherland Liberation War [Korean War] did.

We will bear deep in mind that there is the way of developing the KCU into the glorious one of Kim Il Sung and Kim Jong Il forever and glorifying the honor of being members of the KCU on the road of faithfully upholding the leadership of the greatest Marshal, think and act as taught by the Marshal, when doing even a single work of the KCU and taking a step, and always advance straight, following the party.

All the participants took a pledge to become genuine sons and daughters and ardent juvenile revolutionaries of the Marshal who are always getting ready for the socialist homeland.

The 70th anniversary of the KCU was commemorated throughout the DPRK with KCU members and school children delivering floral bouquets and baskets to KIS and KJI statues and icon mosaics, KCU meetings in provincial cities, cultural activities, sports and recreation games at schools and visits to amusement and water parks.

View of a central report meeting held at the People’s Palace of Culture in Pyonyang on June 5, 2016 commemorating the 70th anniversary of the foundation of the Korean Children’s Union (Photo: Rodong Sinmun).

The WPK Central Committee message also said that “it is a joy and pride of the WPK and people that the members of the KCU are growing up to be pillars who would shoulder the future of Korea. Thanks to three million child revolutionaries, the bright future of the youth power is guaranteed and the DPRK is winning victories as a thriving socialist nation.”  Jon Yong Nam delivered a report which called “upon all the members of the KCU to hold in high esteem Kim Il Sung and Kim Jong Il as the eternal sun and defend and glorify the feats the Generalissimo performed in the history of the Korean children’s movement” and “all the members of the KCU to prepare themselves to be young revolutionaries, boundlessly loyal to Marshal Kim Jong Un.”

On June 3 (Saturday), Choe Ryong Hae, Kim Yong Jin (DPRK Vice Premier), Ri Il Hwan (Director of the WPK Workers’ and Social Organizations Department), Ministry of the People’s Armed Forces [MPAF] and KISYL officials visited the accommodation of KCU delegates.  They “warmly congratulated the delegates” and “called upon the school children to firmly prepare themselves to be the successors who would should upon the future of the DPRK.” 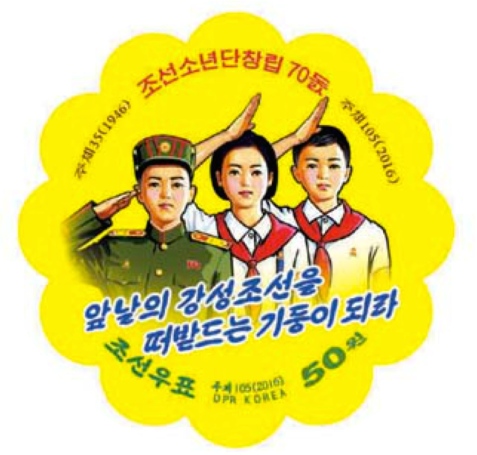 The DPRK State Stamp Bureau issued a stamp commemorating the 70th anniversary of the KCU’s foundation on June 5 (Sunday).