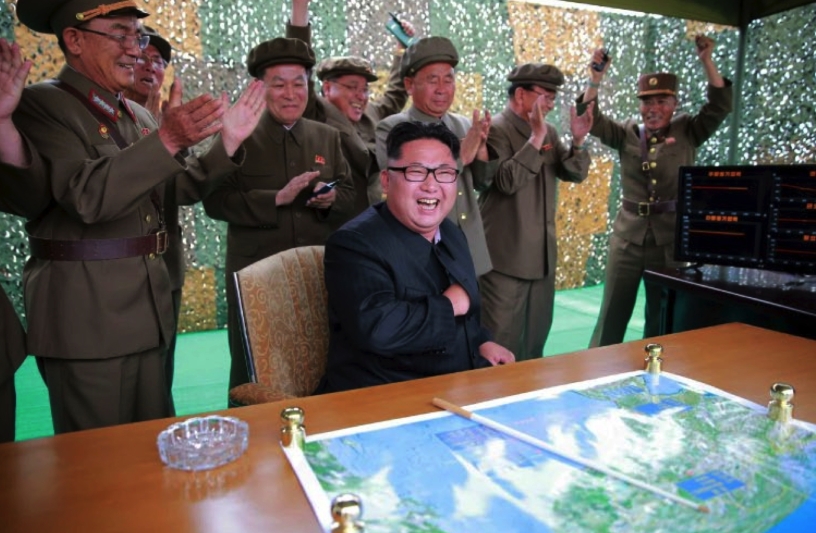 Rotated unretouched and unedited image of the map on Kim Jong Un’s desk in the observation post (Photo: Rodong Sinmun).

At the observation post, Jong Un “gave an order to conduct the missile test-fire after hearing a report on its plan” and the “test-fire of Hwaso’ng-10 was carried out by the high-angle fire system under the simulation of its maximum range.”  According to KCNA and KCBS the “ballistic missile took off a self-propelled launching ramp and accurately landed in the targeted waters forward 400 km [248.54 miles] after flying to the maximum height of 1, 413.6 km [878.37 miles] along planned flight orbit.”

Photos from the bottom right of page one of the June 23, 2016 edition of the WPK daily newspaper Rodong Sinmun show the test of the Hwaso’ng 10 (Musudan) IRBM and Kim Jong Un watching the test from an observation post (Photos: Rodong Sinmun/KCNA).

The Hwaso’ng-10 (Musudan) test “confirmed the flying kinetic feature of a Korean-style ballistic missile with an updated system and its safety and control as well as the technical specifications of newly-designed rocket structure and its dynamic system” and “verified the heat-resistance capability of warhead in the re-entry section and its flight stability…providing a sure sci-tech guarantee for developing the system of strategic weapons.” DPRK state media underscored that the “test-fire was successfully conducted without giving any slightest effect to the security of surrounding countries.”

Jong Un expressed “great satisfaction over the test results” and said joyfully “this happy news would give the conviction in the sure victory and optimism to the army and people of the DPRK and that it is a great event as it strikingly demonstrated again the invincible might of Chuch’e Korea.  Not only the enemy but also the whole world may properly assess the capability of the DPRK media long-range strategic ballistic missiles only with its flight track.”

He declared “with conviction” that “we have the sure capability to attack in an overall and practical way the Americans in the Pacific operation theater.  To reliably defend the security of the country and its people from the constant threats of the US and other hostile forces we should have the powerful offensive means to pose a constant threat to the enemy.  It is needed to increase in a sustained way our preemptive nuclear attack capability and continue the study and development of diverse strategic attack weapons.”

Kim Jong Un remarked that “the real foe of our nuclear force has to confront is a nuclear war itself” and stress was placed that “the nuclear attack capability should be steadily bolstered up to protect the country and its people and the Korean revolution from the US imperialists’ nuclear threat.”  Jong Un said that the “current test-fire marked an important occasion in further strengthening the nuclear attack capacity of our states” and stressed “the need to more thoroughly establish the unitary leadership and management over the strategic nuclear force.” 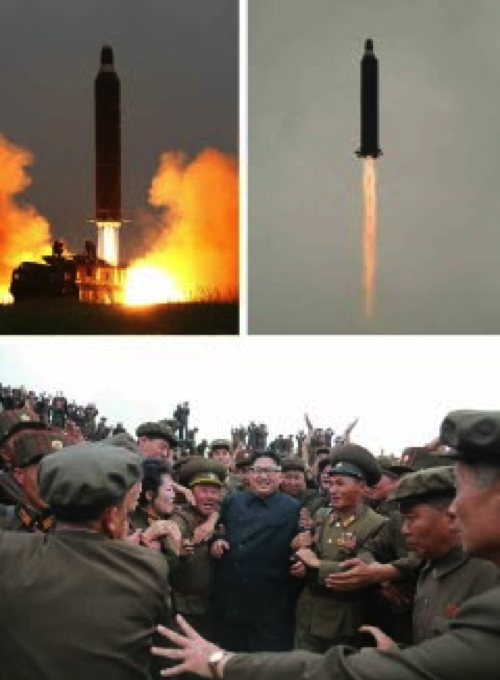 Photos from the bottom of page 2 of the June 23, 2016 edition of the WPK daily newspaper depict the Hwaso’ng-10 IRBM test (Photos: Rodong Sinmun/KCNA).