While touring “the acrylic acid synthesizing and rectifying processes” and the “production of the distemper paints and oil paints” as well as other places in the complex, Jong Un “expressed great satisfaction over the successful construction of the world-level acrylic paint process.” 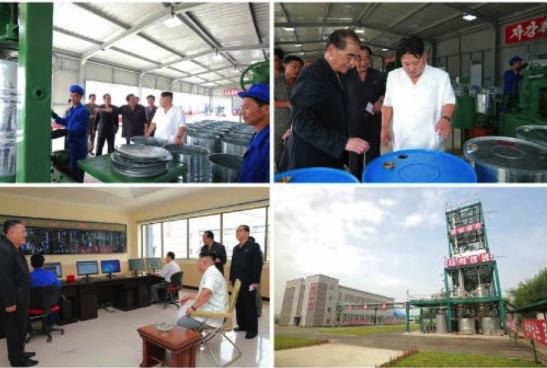 According to KCNA, Jong Un said:

It is very laudable that the process was established in Korean style and its equipment were designed and manufactured by the indigenous efforts. He was pleased to see the mass production of not only paints of diverse colors for exterior and interior walls as well as metals and wood but also Terracottem, substance for ameliorating soil and supplementing moisture.
By putting the production of acrylic paints on a normal footing it has become possible to supply quality paints to different fields of national economy, he sent thanks to the officials, scientists, technicians and workers of the Ministry of Chemical Industry, the Sunch’o’n Chemical Complex, the Namhu’ng Chemical Designing Institute and Kim Ch’aek University of Technology in the name of the Party Central Committee for their big contribution to the building of the precious production process. 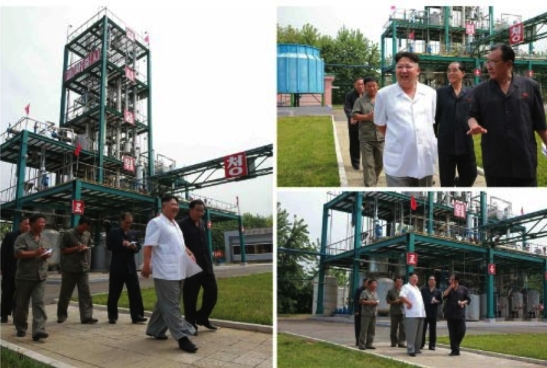 According to KCNA, the following was underscored:

The need to direct sustained big efforts to developing the chemical industry on the basis of the success achieved, he specified tasks and ways for putting the production of chemical goods on Chuch’e-basis at a high level.
At present when the imperialists are becoming ever more undisguised in their moves to isolate and stifle the DPRK as they do not wish to see us be well-off and thrive, we can count only on our own efforts and nobody is willing to help us, he said, noting that if one believes in one’s own strength, even a thousand miles looks very short but even a mile looks a very long distance if one believes in other’s efforts and only when we display the revolutionary spirit of self-reliance, can we achieve the greatest success even under the worst conditions and vigorously advance our revolution.

He closed by expressing belief that “the officials and workers of the Complex would dynamically take the lead in the drive for implementing the decision of the Seventh Congress of the WPK” and concluded his visit with a commemorative photo session.