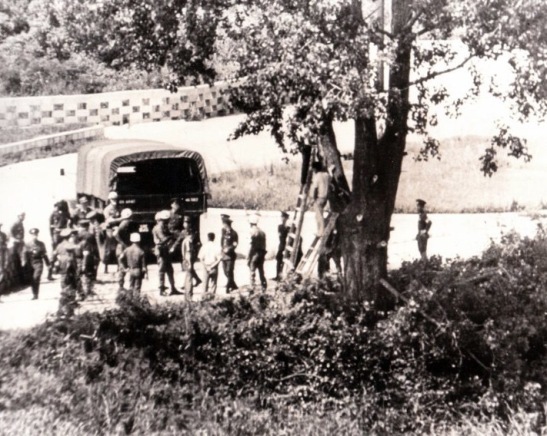 The beginning of the fight between UNC and KPA personnel on August 18, 1976, or the “P’anmunjo’m Axe Incident” (Photo: Second (Indianhead) Division Association/2ida).

The Korean People’s Army [KPA] P’anmunjo’m Mission issued a statement on August 18 (Thursday) to mark the 40th anniversary of the “axe incident,” when two US Army officers attempting to prune a poplar tree in the JSA were killed by KPA services  members.

The statement recounted details of the “‘P’anmunjo’m incident’ which the US imperialists provoked in a planned way to keep its forces in south Korea for an indefinite period and create a pretext for a war of aggression.” According to KCNA, the KPA P’anmunjo’m Mission also said:

The incident left history a serious lesson that only shame and death await aggressors and provokers.

But those who are oblivious of the lesson of history flock to the scene of the incident on the day every year to stage burlesques such as “memorial service” and “commemorative visit.”

Whoever has normal thinking faculty should look back with a cool head on what was brought about by the incident and a number of provocations that were committed in the sky, land and sea for the past 40 years since the incident.

The match-for-a hundred soldiers of the Korean People’s Army, firmly holding rifles, are closely following the military moves of the enemies.

The aggressors and provokers must clearly understand if they come in attack with an axe, they will be hit by the axe to death and that if they brandish a nuclear stick, the US mainland will be hit by nuclear disaster to be reduced to ashes. This is the lesson taught by the “P’anmunjo’m incident” and four-decade history that followed.

The US had better be aware that heavy weapons it introduces to south Korea time and again will only precipitate its ruin and that large monitoring iron tower which it set up for the purpose of inciting military confrontation will turn into a heap of scrap iron in a moment.
Only a miserable dog’s death awaits aggressors and provokers.

This is an unavoidable end the US is fated to meet.