Kim Jong Un Un tours Farm #1116 of KPA Unit #810 in this image on the top-center of the front page of the September 13, 2016 edition of the WPK daily organ Rodong Sinmun (Photo: Rodong Sinmun)

Kim Jong Un’s last observed appearance was his observation and command of a mobile missile drill on September 5.

Kim Jong Un tours Farm #1116 of KPA Unit #810 in these images which appeared bottom left of the front page of the September 13, 2016 edition of the WPK daily organ Rodong Sinmun (Photos: KCNA/Rodong Sinmun). 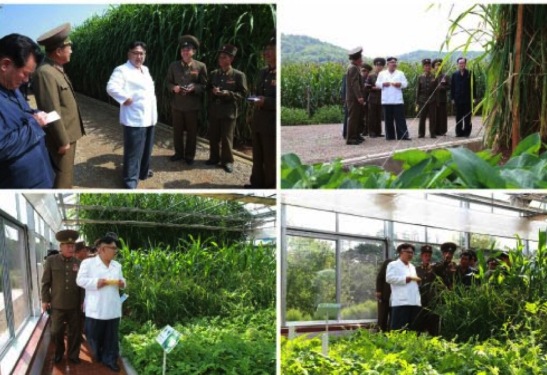 Kim Jong Un visits Farm #1116 of KPA Unit #810 in these images which appeared on the bottom right of the front page of the September 13, 2016 edition of the WPK daily organ Rodong Sinmun (Photos: KCNA/Rodong Sinmun).

Jong Un “looked round” the harvested crops and was briefed about the farm’s corn and rice. Whilst seeing the corn “as big a forearm, well ripe rice ears and other crops with a bright smile on his face,” he “expressed great satisfaction over the results” and noted “that every achievement made by the farm would make him feel refreshed and pleasant.”

Kim Jong Un visits Farm #1116 of KPA Unit #810 in these images which appear top-left on page 2 of the September 13, 2016 edition of the WPK daily organ Rodong Sinmun (Photos: KCNA/Rodong Sinmun).

He said that “President Kim Il Sung (Kim Il-so’ng) and leader Kim Jong Il (Kim Cho’ng-il) who had walked lanes across farm fields in their lifetime in all weather to solve the food problems for the people would have been very glad to those new high-yielding varieties of crops.” He toured the farm and was briefed about seed production. Jong Un was “very satisfied over the fact that the farm bred a high-yield strain of maize suitable to the country’s climatic and soil conditions.” He noted that the “new strain of maize is resistant to rainy wind for its low height and very fit for double cropping as its growth period is less than other strains…its per-hectare yield is beyond a preconceived idea.”

Jong Un noted that “the farm’s officials and researchers had bred a good strain of dry-field rice which is high yield and strongly resistant to drought and harmful insects through their protracted inquiry and painstaking efforts.” He “gave his thanks to the officials, scientists and researchers” and praised “their merits for the breeding of new strains and maize and dry-field rice.” Whilst “watching several crops under trial cultivation at the farm’s modern greenhouse,” Kim Jong Un stressed “the need to further consolidate the material and technical foundations of the farm and said that would he help build one more modern greenhouse bases on the latest technology.”

He issued instructions for the management of farm and “named the new strain of maize P’yo’ngok 9.” He called “for breeding more good strains which ensure a safe harvest with less fertilizer and are resistant to drought, rainy wind, cold weather, high temperature and harmful insects” and he expressed his “belief that officials and party members and other employees of the farm would full discharge their honorable mission and duty as the standard-bearer and vanguard in implementing the WPK’s policy of brining about a radical turn in seed improvement.”