View of the platform at a central report meeting held at the People’s Palace of Culture on October 7, 2016 to mark the 18th anniversary of late leader Kim Jong Il’s election as WPK General Secretary (Photo: Rodong Sinmun).

A central report meeting was held at the People’s Palace of Culture in Pyongyang on October 7 (Friday) to commemorate the 19th anniversary of late DPRK leader Kim Jong Il’s (Kim Cho’ng-il) election to the position of Workers’ Party of Korea [WPK] General-Secretary by the WPK Central Committee and WPK Central Military Commission on October 8, 1997. 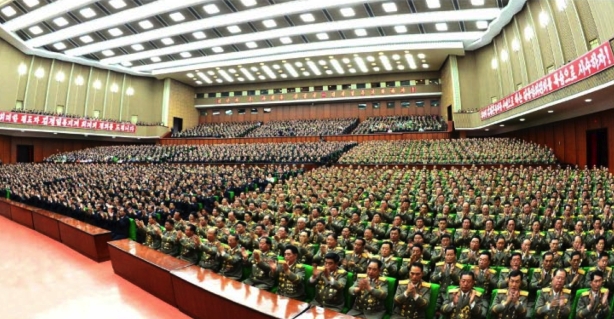 View of the venue and slogans and participants at a central report meeting in Pyongyang on October 7, 2016 to mark the 19th anniversary of Kim Jong Il’s election as WPK General Secretary (Photo: Rodong Sinmun).

Kim Ki Nam presided over the meeting and the report as delivered Choe Ryong Hae.  According to KCNA, Choe said in his report that:

Kim Jong Il’s election to the top post of the WPK provided a sure guarantee for developing the party into the one of President Kim Il Sung (Kim Il-so’ng) and revolutionary party of Chuch’e type and accomplishing the revolutionary cause of Chuch’e started in Mt. Paektu.

Comrade Kim Jong Il led the WPK for over half a century, creating a shining model in building the revolutionary party in the era of independence and bringing about a great victory and gigantic change in the struggle for building a socialist power.

Thanks to his outstanding idea and extraordinary leadership the outdated patterns in party work were broken, a radical change was brought about in building organization, idea and art of leadership of the party, the appearance of the society changed and an eternal foundation was firmly consolidated to accomplish the cause of socialism.

With his extraordinary wisdom and through his energetic ideological and theoretical activities, he formulated the revolutionary idea of the great leader as Kimilsungism, laid down a program for modeling the whole society on Kimilsungism and gave perfect answers to theoretical and practical problems in all fields including the building of the party, armed forces, state and economy and culture.

He developed in depth the great leader’s idea of prioritizing arms as a revolutionary idea of So’ngun (military-first) and theory of So’ngun (military-first) politics and enunciated an original theory of building a socialist power. This is an outstanding feat that made it possible for the WPK to invariably preserve its own revolutionary nature even in the worst adversity and bring about a new radical turn in carrying out the cause of socialism.

He set it as the general task of the party building to develop the WPK into the party of the great leader. He made sure that the party firmly adhered to the principle of the Chuch’e-oriented party building based on the revolutionary outlook on the leader and organized and conducted the party building and activities as required by Kimilsungism.

He bolstered up as firm as an iron wall the nation’s defense capability with the Korean People’s Army as the core under the banner of So’ngun (military-first) and thus laid a strong military foundation for firmly protecting the dignity and sovereignty of the country and the gains of revolution.

He aroused all the people to the drive to implement the strategic line of building socialist economy, consolidating the material and technical foundation of the self-supporting national economy and laying a springboard for building an economic power.

He led the sacred cause of national reunification to usher in the June 15 era of reunification so that the Koreans advanced in line with the idea of By Our Nation Itself, remarkably raised the DPRK’s international position through his energetic external activities and made a historic contribution to accomplishing the cause of global independence.

The great exploits Kim Jong Il performed by leading the WPK for years are shedding rays as a militant banner for victorious advance of revolution and its completion, adding that he will always be alive as the eternal leader of the WPK and the sun of Chuch’e along with his immortal exploits.

The cause of the party building of Chuch’e led by Kim Jong Il is being successfully carried forward by Marshal Kim Jong Un (Kim Cho’ng-u’n), the reporter called for flying higher the red party flag of Chuch’e associated with the sacred life of Kim Jong Il and waging a dynamic struggle for the final victory of the revolutionary cause of Chuch’e.