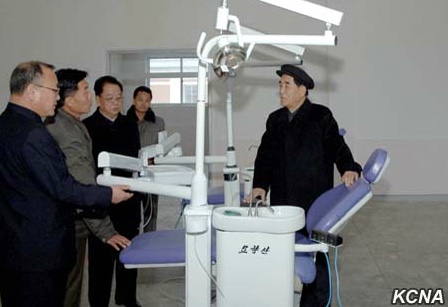 DPRK state media reported on November 19, 2016 (Saturday) that vice chairman to the State Affairs Commission (SAC) and DPRK Premier Pak Pong Ju visited the T’ongch’o’n Fishery Station “alive with winter-fishing drive.” During his visit, he “encouraged the fishermen in their drive to bring about innovations in fishing every day despite unfavorable weather conditions.” At a consultative meeting that included fishery officials, measures were taken to “intensify fishing operations by focusing all efforts on them, consolidating the material and technical foundation of the fishery state and fully provide living conditions to the fisherman.”

Pak also visited the Myohyangsan Medical Appliances Factory and “underscored the need to further glorify the exploits performed by President Kim Il Sung (Kim Il-so’ng) and leader Kim Jong Il (Kim Cho’ng-il) for developing the factory and boost the local production of the medical appliances for preventative and curative health care for the people in the spirit of the self-development.” He also stopped off at Hu’ich’o’n Power Stations No. 2 and No. 10 and learned “about their management and operation and took measures for operating…equipment in full capacity by improving their management and technical control.”