Departing for the cemetery, members of Ryu Mi-yo’ng’s family carry her portrait and her state awards in front of her casket at the Sojang Center in Pot’onggang-kuyo’k in Pyongyang (Photo: KCNA). 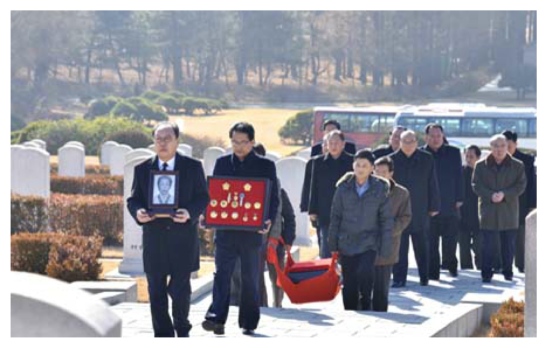 Mourners gathered at the Sojang Club in Pyongyang and observed a moment of silence after which Ryu Mi Yong’s casket was conveyed by a funeral cortege to the Patriotic Martyrs’ Cemetery.  Yang Hyong Sop spoke at a grave side service.  He said that Ryu’s demise “a renowned woman political activist was a great loss” and emphasized that “even though her heart stopped beating, the feats she performed for the country and nation shall remain forever.”

After Yang’s eulogy and remarks from a member of her family, Ryu Mi Yong’s remains were interred with those of her husband, former ROK Foreign Minister Choe Tok Sin (Ch’oe To’k-sin), in his grave.  Members of her family and of her funeral committee shoveled dirt over the grave.  Floral wreaths from Kim Jong Un (Kim Cho’ng-u’n), the WPK Central Committee, the SPA Presidium, the Ch’o’ndoist Ch’o’ngu Party Central Committee and other DPRK institutions were placed before the grave.  Then, mourners observed another moment of silence.