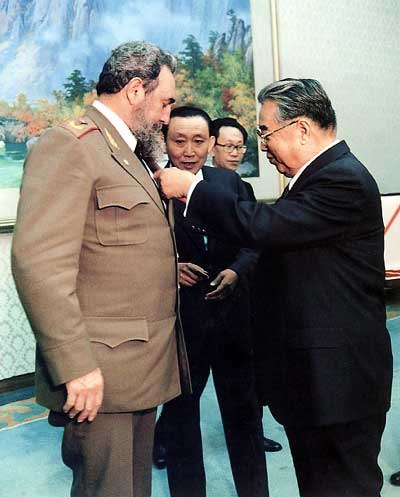 Late DPRK President and founder Kim Il Sung (Kim Il-so’ng) pins an award on Fidel Castro during a ceremony at the Ku’msusan Assembly Hall (now Ku’msusan Palace of the Sun) on March 8, 1986. According to DPRK state radio’s report at the time, Fidel was given the title Hero of the DPRK, the Gold Star Medal and National Order of the Flag Hero 1st Class, and other members of his delegation were given state awards and titles (Photo: NK Leadership Watch file photo).

The Workers’ Party of Korea [WPK] Central Committee, the Supreme People’s Assembly [SPA] Presidium and the DPRK Cabinet issued a joint decision on November 27 (Sunday) declaring a national mourning period from November 28 (Monday) to November 30 (Wednesday) to mark the death of former Cuban President Fidel Castro.  During the period of mourning, flags will be lowered to half-mast and senior and mid-level officials of the party, state and army will make condolence calls to the Cuban Embassy in the DPRK.

As part of the national mourning period, DPRK state media published a brief obituary about Fidel:

Fidel Castro Ruz was born in Oriente Province of Cuba on August 13, 1926.

He graduated from a secondary school at Santiago de Cuba City and was admitted to Havana University in 1945. And he was called to the bar after graduation of the university.

He took part in the struggle against violence and corruption of the dictatorial regime at home and abroad from 1947 to 1952.

He, together with 165 young men and women students who were armed with the idea against dictatorship, attacked Moncada Barracks, a point of military importance for the Batista dictatorial regime in Santiago de Cuba City, kindling the flames of armed struggle.

He was arrested by enemy with more than 100 members who took part in the armed struggle as they failed in the first armed uprising and served prison term on Pinos Island of Cuba (Juventud Island at present).

After his release in May 1955, he organized the “July 26 movement”. He went to Mexico as an exile together with his comrades-in-arms in July 1955 and prepared for guerrilla struggle.

He landed in Oriente Province of Cuba by Granma ship with 82 armed fellows from Mexico in December 1956 and staged an armed struggle with Mt. Sierra Maestra as a base.

He finally overturned the dictatorial regime of Batista in January 1959 and achieved the victory of the Cuban revolution.

He was appointed as the prime minister of the revolutionary government in Feb. 1959 and had worked as the first secretary of the Central Committee of the Communist Party of Cuba from Oct. 1965.

He was elected and worked as first secretary of the C.C., Communist Party of Cuba from the First Congress to the Fifth Congress of the Party.

Fidel Castro Ruz visited the DPRK in March 1986. He met with President Kim Il Sung and leader Kim Jong Il and made great efforts to deepen the militant friendship and friendly and cooperative relations between the peoples of the two countries fighting in the outpost of anti-imperialist, anti-U.S. struggle.

He, a close friend and old revolutionary comrade-in-arms of the Korean people, was awarded several orders of the DPRK including the title of DPRK Hero.

His feats for the victorious advance in the cause of anti-imperialist independence and socialism and the development of the DPRK-Cuba friendly relations will remain forever. 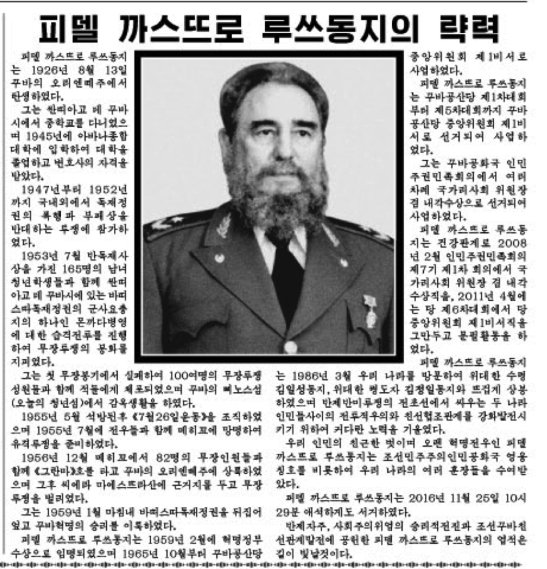 Official portrait and obituary of Fidel Castro which appeared on the top-right of page 4 of the November 28, 2016 edition of the WPK daily newspaper Rodong Sinmun (Photo: Rodong Sinmun).

Kim Jong Un (Kim Cho’ng-u’n) sent a message of condolence to Fidel’s successor, his brother Raul, on November 27 (Sunday).  According to KCNA:

Upon hearing the sad news that Comrade Fidel Castro Ruz, the supreme leader of the Cuban revolution, passed away unexpectedly, I expressed deep condolences to you and, through you, to the Cuban party, government and people and the bereaved family members of the deceased.

Comrade Fidel Castro Ruz waged a bloody struggle in his early years with arms in his hands, winning the victory of the Cuban revolution.

Comrade Fidel Castro Ruz was the outstanding leader of the Cuban people and a prominent political activist who made distinguished contributions to accomplishing the cause of independence against imperialism, the cause of socialism and justice, as he honorably defended the sovereignty and dignity of the country, established the socialist system where the people became the genuine masters for the first time in the Western Hemisphere and devoted all his life to the prosperity of the country and the happiness of the people.

He was the close friend and comrade of the Korean people who made all efforts to strengthen the friendly and cooperative relations between the two parties, governments and peoples of our two countries and extended firm support and encouragement to our efforts for national reunification and just cause with the invariable revolutionary principle and obligation for over half a century.

Though he passed away, the precious feats he performed will remain forever in the hearts of the peoples of our two countries and the hearts of progressive mankind.

I express conviction that the revolutionary Cuban people would overcome the pain they suffer from the loss of their distinguished leader and certainly build the prospering ideal society of the people and achieve the victory of the socialist cause under the wise leadership of you, Comrade Raul Castro Ruz, true to the lifetime intention of Comrade Fidel Castro Ruz. 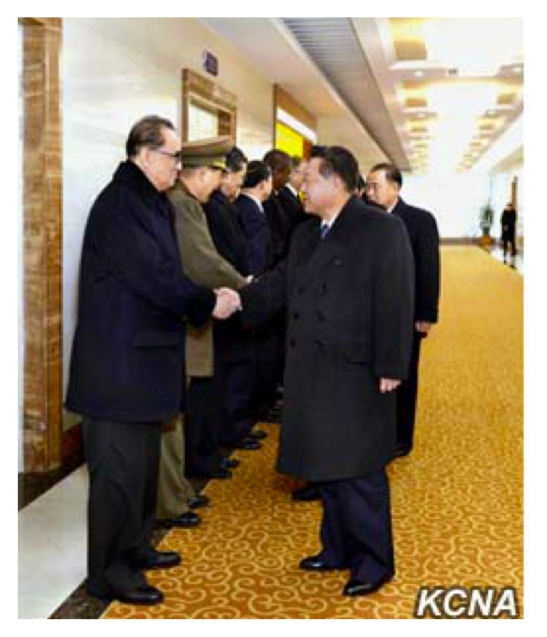