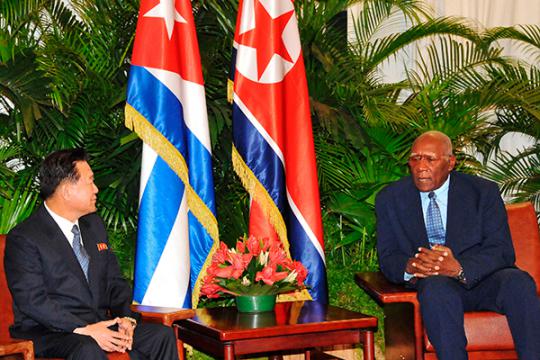 According to the Cuban Foreign Ministry, the two senior officials “reviewed the state of bilateral relations and their perspectives, highlighting the ties of brotherhood and fraternity that unite both parties, governments and peoples.”  According to DPRK state media, Choe “noted that the army and people of the DPRK have and achieved successes in the general offensive for implementing the decision of the Seventh Congress of the Workers’ Party of Korea with great pride and honor of holding Kim Jong Un as chairman of the WPK in high esteem” and expressed “the stand of the WPK and the DPRK government to invariably boost the bilateral relations with Cuba.”

Vice President Valdés Mesa said that “respected Supreme Leader Kim Jong Un (Kim Cho’ng-u’n) is wisely leading the Korean people in the efforts to build a socialist power with his distinguished leadership ability by creditably carrying forward the cause of the great leaders” and that it is “an expression of moral sense of revolutionary obligation that Kim Jong Un visited the Cuban Embassy in Pyongyang to mourn the demise of Fidel Castro Ruz and sent a party and state delegation to Cuba.”  He also noted that Cuba “resolutely opposes all the ‘resolutions’ against the DPRK faked up by the hostile forces in the UN” and expressed “support for the struggle of the Korean people for accomplishing the cause of national reunification.”