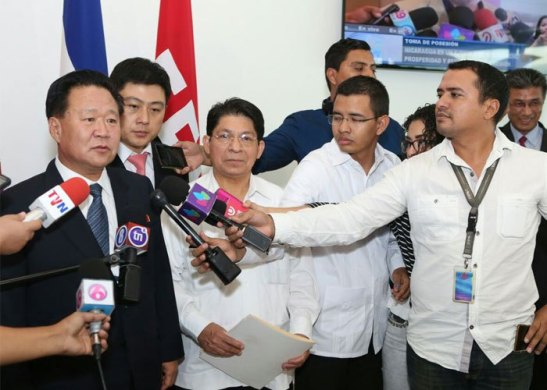 President Ortega has visited the DPRK twice, during March 18 through March 21, 1983, and September 14 to September 16, 1986.  On both occasions, Ortega met with late DPRK President and founder Kim Il Sung (Kim Il-so’ng).  Interestingly (‘though not surprisingly), Ortega participated in a boycott of the 1988 Summer Olympics held in Seoul, ROK, and sent a delegation to the Pyongyang-hosted World Festival of Youth and Students in July 1989.  Choe Ryong Hae played a significant role in coordinating the latter event.

Upon arriving in Managua, Choe Ryong Hae was received by Nicaragua’s Vice Foreign Minister Denis Moncada Colindres and held a brief media availability with reporters.  According to local press reports Choe remarked that “I have come to Nicaragua to congratulate President Daniel Ortega who was elected by a popular majority.  I wish with all my heart they (Nicaraguan citizens) have greater successes in their work responsibilities. . .relations between Nicaragua and the DPRK will be consolidated and further developed.”

On January 10, Choe attended Ortega’s inauguration.  During a meet-and-greet Choe “conveyed the warm greetings of Kim Jong Un” to President Ortega who “expressed deep thanks and asked Choe to convey his heartfelt greetings” to Jong Un.  Ortega “affirmed that it is the invariable stand of the government and people of Nicaragua to value and steadily develop the historical relations of friendship between the two countries [as an] expression of solidarity for Nicaragua that Kim Jong Un sent his special envoy to the inaugural ceremony.”  President Ortega, according to DPRK state media, “wished the Korean people only victory in their struggle for achieving the country’s prosperity under leadership of Kim Jong Un.”

President Maduro remarked that Venezuela “would thwart the US’ ever more undisguised schemes with concerted efforts, dynamically advance along the road of socialism and always stand by the DPRK in the struggle for socialism against imperialism.”  President Morales said that he “admires the party, government and people of the DPRK standing against imperialism and that his country will overcome difficulties in solidarity with the world’s progressive people.”

1st Vice President Diaz-Canel said that “the invincible ties of friendship provided by the preceding leaders of the two countries will develop into true comradely ones forever” and he wished Jong Un “good health and greater success in his responsible work for leading the struggle of the Korean people for the prosperity of the country in the new year, too.”