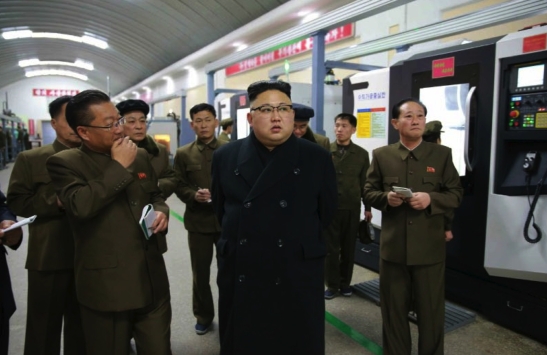 Kim Jong Un is briefed about production at the Kangdong Precision Machine Plant in the suburbs of Pyongyang in a photo which appeared top-center on the front page of the February 7, 2017 edition of WPK daily organ Rodong Sinmun (Photo: Rodong Sinmun).

Jong Un toured the plant, dropping in at a products exhibition hall, processing shop, education facilities, a health complex and workers’ residences.  He remarked that the recently-built exhibition hall was constructed “as a splendid structure” and he likes “everything displayed there as varieties of exhibits look nice, easy to operation and very effiencient… [the] precision machine processing technology is at the world-level.” 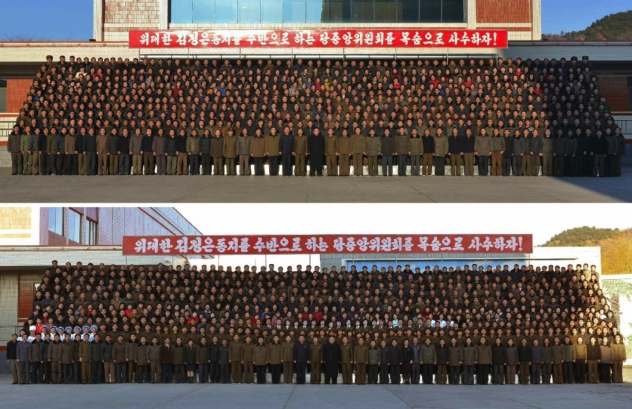 Commemorative photographs of Kim Jong Un with managers and employees of the Kangdong Precision Machine Plant which appeared top center on the second page of the February 7, 2017 edition of Rodong Sinmun (Photos: Rodong Sinmun/KCNA).

He toured a soy bean processing factory and noted that “it is good to turn out varieties of soy bean-based products after building bean sprouts processing factory, bean curd processing factory, etc.”  At the Ponghwa Health Complex he said he was “pleased with everything at the health complex having bath facilities, swimming pool, barber’s beauty parlor, table tennis room, gym-cum-clinic, dining room, etc.  It has been built in such a way that it looks bright, cozy [and] comfortable…it was a good idea that ceiling built with glass.”  Jong Un was “very pleased that the employees of the plant and their families have become able to lead a cultured life like urban people.”

At the workers’ residences he said that “the employees would like the dwelling houses built in an impeccable style and fitted with quality and attractive furniture.”  He told the officials accompanying him “to let settlers move to new houses on the occasion of the birth anniversary of leader Kim Jong Il (Kim Cho’ng-il).”  He appreciated with “high enthusiasm of the workers at the plant to boost the production” and issued tasks “facing the plant.”  He then posed for a commemorative photo with the functionaries, managers and employees of the Kangdong Precision Machine Plant.