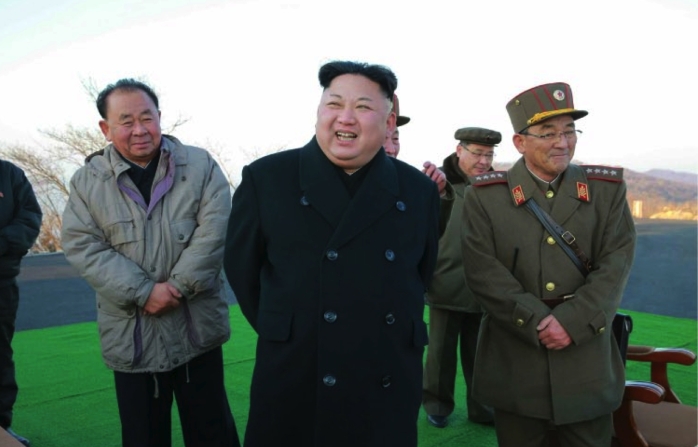 The test was conducted by the KPA Strategic Force’s Hwaso’ng “artillery units” who have been “tasked to strike the bases of the US imperialist aggressor forces in Japan in [a] contingency.”  Jong Un was briefed about preparatory work for the missile drill while conducting a field inspection of the launch area.  After ascending an observation area, he was briefed about the missile drill then ordered it to begin.

As he watched the drill, Kim Jong Un “appreciated that Hwaso’ng artillery units of the Strategic Force are very good at organizing and commanding fire strikes and strictly ensuring rapid and simultaneous fire strikes..”  He said that the “four ballistic rockets launched simultaneously are so accurate that they look like acrobatic flying corps in formation.”  He praised the “Hwaso’ng artillerymen for successfully concluding the drill for launching ballistic rockets simultaneously” and remarked that “it is a great pride of the Party and state, army and people to have such a strongest one as the KPA Strategic Rocket Force equipped with Korean-style powerful ballistic rockets and Chuch’e-based fire strike methods.”

Kim Jong Un issued tasks to the MID cadres accompanying him “to be fulfilled to strictly establish a monolithic leadership system and commanding and managing system of the Supreme Commander over the strategic force, further round off the Chuch’e-based rocket striking methods put on an actual, scientific and modern basis, continuously develop Korean-style ultra precision and intellectually promoted rockets and bolster them in quantity and quality.”  Jong Un ordered the KPA Strategic Force to “keep highly alert as required by the grim situation in which an actual war may break out anytime, and get fully ready to promptly move, take positions and strike so that it can open fire to annihilate the enemies once the Party Central Committee issues an order.”

Jong Un attended a commemorative photo-op with the missile drill’s participants and he expressed his “expectation and belief that the Hwaso’ng artillerymen of the KPA Strategic Force would successfully discharge their sacred mission and duty as the creditable nuclear force of the Workers’ Party of Korea in the death-defying struggle against the enemies.”