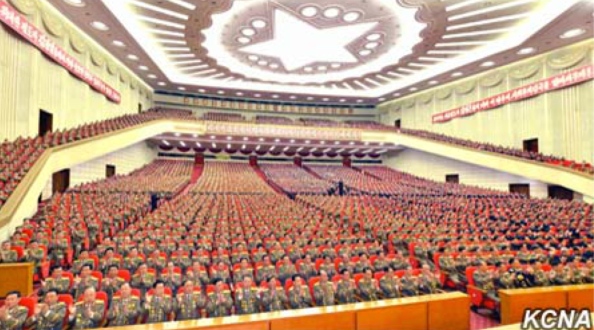 View from the platform of the April 25 House of Culture, venue of the April 8, 2017 central report meeting (Photo: KCNA). 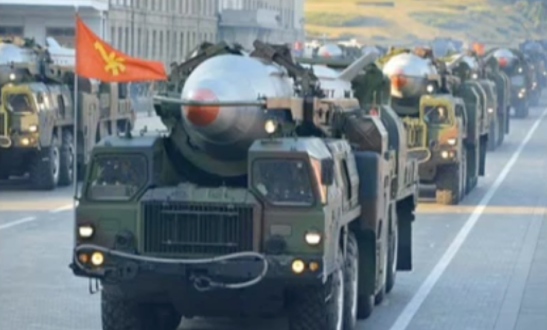 A TEL and ballistic missile from a photo presentation about KJI’s accomplishments which aired during KCTV’s coverage of the central report meeting (Photo: KCNA/KCTV). 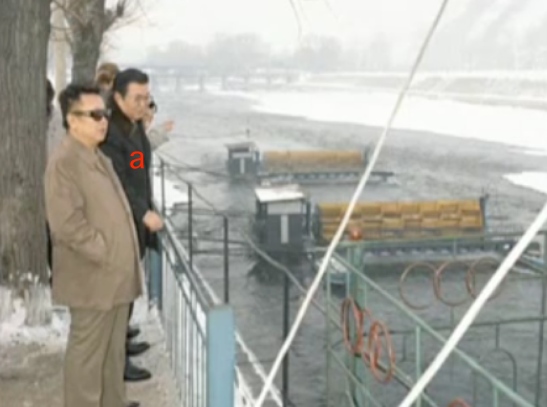 KJI and the late Yon Hyong Muk [a] during an on-site visit in a photo which appeared in a slide show presentation which aired during KCTV’s coverage of the April 8, 2017 central report meeting commemorating the late leader’s election as chairman of the NDC (Photo: KCTV/KCNA). 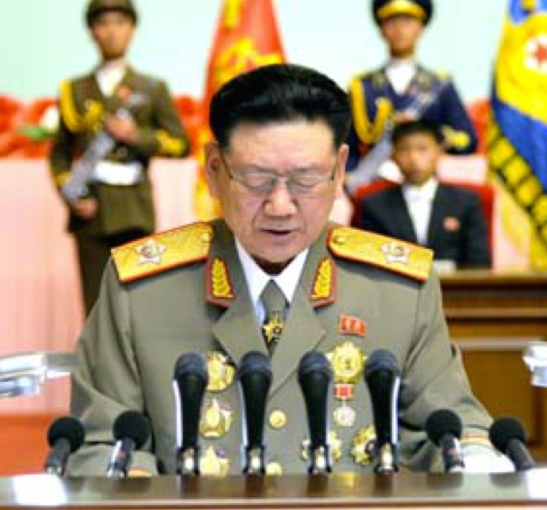 According to KCNA, VMar Hwang said:

Kim Jong Il’s election as NDC chairman marked a historic event of epochal significance in the struggle for carving out the destiny of the people and achieving the prosperity of the DPRK.

Kim Jong Il brought about a new turn in building a powerful socialist country under the uplifted banner of So’ngun (military-first) in the period of steering overall state affairs, shouldering upon himself the heavy responsibility as NDC chairman.

Under the complicated international political situation, Kim Jong Il firmly adhered to the independent stand and led the DPRK to consistently embody the principle of independence in politics, self-support in the economy and self-reliance in national defense.

He fully equipped the army and people with the revolutionary idea of the party and consolidated the single-minded unity of the leader, the party, the army and the people as firm as a rock, thus building political forces so that the DPRK could maintain a strong independent stand in its activities.

He regarded it as a firm principle to accelerate the building of a powerful socialist country by dint of self-reliance and self-development and made sure that all issues arising in the revolution and construction were solved by our own efforts and with indigenous technology and locally available resources.

He reliably defended the socialist cause with the original So’ngun (military-first) politics and turned the DPRK into an invincible military power and nuclear weapons state which no formidable enemy dare attack.

He glorified the DPRK as a socialist state centered on the popular masses, the state governed by the Chuch’e-oriented viewpoint on the people and people’s philosophy.

Under his leadership, there came the June 15 era of reunification in which the Koreans were making a dynamic advance, guided by the idea of “By Our Nation Itself” and the DPRK’s international prestige and influence rapidly rose.

His ardent and patriotic desire for a powerful country is being translated into reality under the guidance of respected Supreme Leader Kim Jong Un (Kim Cho’ng-u’n).

The present era going by the august name of Kim Jong Un will be glorified as the era of great succession in which Kim Jong Il’s patriotic desire for a powerful country is coming true in all aspects and the great era of prosperity in which the DPRK steadily prospers and its people’s dream and ideal are coming true.