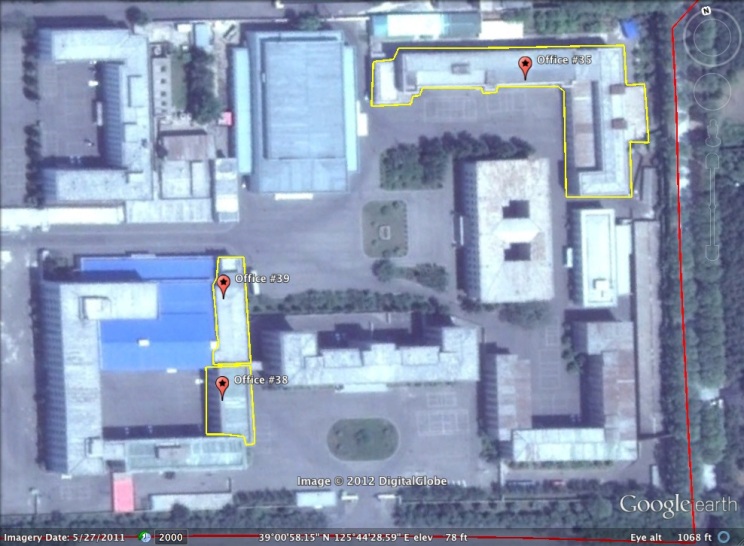 The Third Floor is a general use term referring to the interaction of  three bureaus subordinate to. the Party Central Committee Secretariat. Office# 35, Office #38, Office #39, in coordination with the Personal Secretariat are tasked with intelligence collection, earning foreign currency for the party and core elites and managing some of the party’s and the Kim Family’s money.  Third Floor operatives, stationed in over 20 countries in the world, were also responsible for the purchase of a variety of goods for DPRK elites and collecting intelligence, outside of the DPRK’s dedicated information networks.

The term Third Floor refers to the original location of these offices—on the third floor of Kim Jong-il’s office building in the KWP Central Committee Office Complex in the Central District of Pyongyang.  The Third Floor is technically subordinate to the Party Central Committee.  However, it is directly tied to the Kim Family.

Office #35 is also known as the External Investigations and Intelligence Department.  It technically manages and coordinates intelligence collection, analysis and operations primarily concerning the ROK, but also including Japan, Europe and North America.

As part of a 2009 consolidation, it is technically subordinate to the National Defense Commission’s General Reconnaissance Bureau (and NDC Vice Chairman, Gen. O Kuk Ryol).  However, Officer #35’s director reports through the KWP.  Under the NDC GRB, it is grouped with the CC KWP Operations Department, CC KWP United Front Department, and for certain missions, the Ministry of State Security.  Office #35 operatives have been implicated in weapons and narcotics trafficking to earn foreign currency to support intelligence collection operations.  The last known director was a civilian, Ho Myong Uk.  Within the DPRK Office #35 provides raw information from media sources and human contacts which are used in the production of intelligence briefings for senior DPRK leaders.

Office #39 is the primary manager of a network of legitimate and illicit companies that earn foreign currency for the country’s Third Economy. Office #39 began as a subunit (section) of the CC KWP Finance and Accounting Department in the 1970s to sell gold and other minerals from DPRK mines.

It officially became an independent party department in 1988.  Office #39’s companies have been implicated in cigarette bootlegging, documents and insurance fraud, currency counterfeiting and narcotics manufacturing and trafficking (poppies and methamphetamine).[1]

Office #39 also ensures foreign currency earning enterprises remit a percentage of their revenue to Kim Jong Il.   The last known director of Office #39 was Jon Il Chun.  From the 1980s until 2010 Kim Tong Un serves as chief of Office #39.  Mr. Kim (a geologist by training) was manager since its inception in the 1970’s.  In 2010 Jon Il Chun replaced Kim.  Jon was Office #39’s senior deputy director from 1998 to 2010.  Kim and Jon were, respectively, president and vice president of the Taesong Economic Group.

Office #38 is responsible for managing some of Kim Jong Il’s finances, particularly the technical and logistical administration of Kim family funds.  It linked to the Personal Secretariat.  Office #38 controlled a network of holding companies involved in various legitimate hospitality, retail and restaurant businesses within the DPRK and other Asian countries.  Some Office #38 operatives were involved in acquiring a variety of goods from abroad, including appliances and technology such as IPods, televisions, video (DVD/VHS) players, automobiles, speedboats, furnishings and fixtures for his homes, as well as foodstuffs and alcohol.  Some of these goods are for the use KJI , his family and subordinates.  Other goods are given to party, government and military elites.