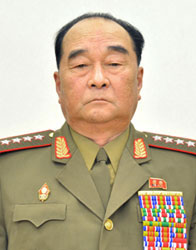 Kim Kyok Sik was born in 1938.  He studied at Kim Il Sung Military Academy.  In the 1970s he served as a military attaché in Syria.  Kim likely managed instructors and other training support for the ELF (in Ethiopia) and the Turkish Workers’ Party which the DPRK provided in the early 1970s, in coordination with Syria.

He returned to the DPRK in the early 1980s and served as a squad commander.  He was elected a deputy to the 9th Supreme People’s Assembly in 1990.  He was elected an alternate member of the CC KWP at its 18th plenum (6th Term/6th CC) in May 1990 and promoted to full membership at the 19th plenum in December 1991.  Kim was promoted to Colonel General in 1992 and was a member of Kim Il Sung’s Funeral Committee in July 1994.

Kim Kyok Siik was assigned command of II Army Corps in October 1994 where he served until 2007. He was promoted to General in 1997.  In April 2007 Kim was appointed Chief of the KPA General Staff, replacing Kim Yong Chun.  He served as chief of the GSD until February 2009, when he was replaced by Ri Yong Ho.

Gen Shwe Mann (left) and Gen Kim Gyok-sik (R) exchange copies of a memorandum of understanding at the Defense Ministry on November, 2008. (The Irrawaddy)

Kim Kyok Sik’s Party Central Committee membership status was downgraded when his name appeared on a list of alternate (candidate) members on 28 September 2010.  Gen. Kim participated in the KPA’s artillery shelling of Yonpyong Island on 23 November 2010.  In August 2011 Kim migrated back to Pyongyang where he served as Vice Minister of the People’s Armed Forces  in the MPAF.  In November 2012 Gen. Kim was appointed Minister of the People’s Armed Forces.  At the March 2013 KWP Central Committee meeting, Kim was elected an alternate member of the KWP Political Bureau and a full member of the Party Central Committee.  Kim was a rostrum member at the 7th session of the 12th Supreme People’s Assembly on 1 April 2013 and was elected a member of the National Defense Commission.

In May 2012, Kim Kyok Sik was removed from office as Minister of the People’s Armed Forces, seven months after his appointment. He made no observed public appearances for nearly three weeks.  On 22 May 2013, DPRK state media identified Gen. Kim as Chief of the KPA General Staff, a position he previously held from 2007 to 2009.  In early August he was quietly removed from office and his current position is not known.

(May): Removed as Minister of the People’s Armed Forces; appointed, Chief of the KPA General Staff

(August) Removed from office as Chief of the KPA General Staff