General Ri Myong Su (Ri Myo’ng-su) is the Chief of the KPA General Staff.  He is the former Minister of People’s Security and a former member of the DPRK National Defense Commission and KWP Political Bureau  He is a member of the Korean Workers’ Party [KWP] Central Committee and  Central Military Commission, and a deputy (delegate) to the 12th Supreme People’s Assembly.  Ri was a military aide of the late supreme leader, Kim Jong Il.

Ri Myong Su’s official career began  in July 1950 during the Korean War.  He later attended and graduated from Kim Il Sung Military University.  In the 1960s and 1970s Ri served in successive operations and command positions in the forward-deployed V Army Corps.  In 1980 he was appointed director of the Fatherland Liberation (Korean) War Museum in Pyongyang.  In the 1980s Ri served in the III Army Corps.  He was promoted to Lieutenant General (chungjang) in April 1992 and was appointed chief of staff of III Army Corps in 1993. 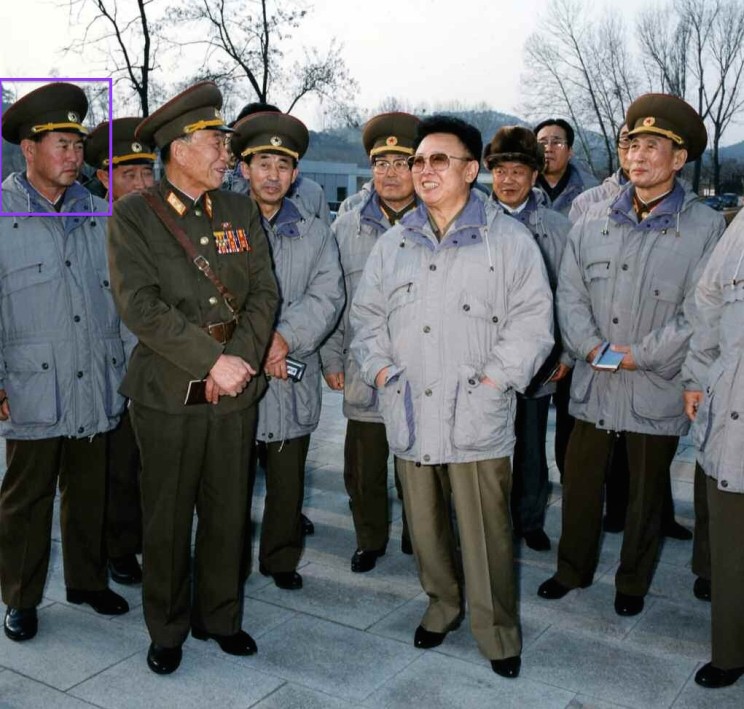 In 1995, Ri Myong Su was promoted to Colonel General (sangjang).  He was appointed director of the KPA General Staff Operations Bureau and ex aequo 1st Vice Chief of the KPA General Staff in November 1996.  In that position, Ri was responsible for the daily operational management of the DPRK’s ground, naval, air and anti-air forces.  In the event of a war or national crisis, the director of the Operations Bureau would control the interface between the supreme command, the DPRK’s conventional armed forces, reserve units and civil defense brigades.  After this appointment, Ri was regular member of Kim Jong Il’s entourage.    Ri’s presence with KJI was usually balanced with that of General Hyon Chol Hae and General Pak Jae Gyong.  For much of the 1990s and 2000s Ri and Gen. Hyon became KJI’s public adjutants.  Ri was promoted to General (taejang) in October 2000.

From 2003 to 2006, General Ri along with General Hyon, General Pak Jae Gyong, former DPRK Cabinet Premier Choe Yong Rim and several other officials were members of the KPA Special Operations Command Group.  This group, subordinate to Kim Jong Il in his capacity as KPA Supreme Commander, managed contingency planning and operations within the DPRK following the 2003 invasion of Iraq by the US and coalition forces.

In 2007 General Ri migrated to the National Defense Commission [NDC] and became director of the NDC Administration Bureau.  In that position he was responsible for the daily management of the NDC’s policy planning, logistics and finances.  His ties to Kim Jong Un most began during 2007 or 2008, when Ri became a tutor and escort for the successor.

In February 2013, Ri Myong Su was removed from office as Minister of People’s Security.  At the March 2013 meeting of the KWP Central Committee he was removed from the Political Bureau and the the 7th session of the 12th SPA was removed as a member of the National Defense Commission.  Ri later appeared with fellow veterans of the Fatherland Liberation War during July 2013.  In December 2013 Ri was placed under investigation and interrogated as part of the purge (and later execution) of NDC Vice Chairman Jang Song Taek.

In February 2016, General Ri Myong Su came out of retirement and was appointed Chief of the KPA General Staff.  Within a few weeks after his appointment, General Ri commanded live fire military exercises involving the defense of Pyongyang.

According to official DPRK accounts, Ri Myong Su was born on 20 February 1934 in Myo’ngch’o’n County, North Hamgyo’ng Province.  Other sources claim he was born in 1938.  According to South Korean sources, Ri’s son runs a foreign trading corporation.

General Ri’s presence at Kim Jong Il’s side was so prevalent in DPRK state media images of the late supreme leader that Ri appears on the country’s commemorative postage stamps.  However, Ri’s social, or personal, relationship with KJI was not especially close.  Ri’s link into KJI’s inner circle came through his close ties to the late VMar Jang Song U, who was commander of III Army Corps when Ri served as its chief of staff.  Ri’s service in the III Army Corps, which forms Pyongyang’s outer defensive ring against a coup or attacks, occurred during a major personnel shuffle of senior KPA officials and the formal transition from Kim Il Sung to Kim Jong Il.  This experience earned him KJI’s favor and trust.