Kim Jong Gak was a member of Kim Il Sung’s Funeral Committee in July 1994 and O Jin U’s Funeral Committee in February 1995.  Kim joined the Supreme People’s Assembly as a deputy (delegate) in 1998, an ongoing position.  His appointment as MPAF Vice Minister was renewed at the opening plenum of the 10th SPA in September 1998.  Kim had a managerial role over headquarters political activities.  He also had a coordinating role on military parades and other KPA public activities.

Kim was promoted to General in April 2002.  In 2004 he began appearing in the DPRK’s external press participating in meetings with foreign delegations.  He was a surrogate for the KPA at a reception for Pyongyang military attaches.  He also attended meetings and receptions with DPRK allies such as the Russia, Uganda, Cuba and China.  In 2006 he was part of a group that met with then-Chinese Defense Minister Cao Gangchuan during a 2006 Pyongyang visit.  Kim Jong Gak gave the keynote speech at a celebratory rally in Kim Il Sung Square following the DPRK’s test of a nuclear device in October 2006.

Gen. Kim first appeared as a reported member of Kim Jong Il’s entourage when KJI visited the PRC Embassy in Pyongyang in 2007.  Kim Jong Gak also attended a mass games performance with KJI in October 2007.  An indication of his ascendant career occurred twice in 2008 when Gen. Kim joined KJI’s entourage paying tribute to Kim Il Sung at the Kumsusan Memorial Hall.  In August 2008, while KJI was recovering from his stroke, Kim Jong Gak delivered another keynote speech commemorating the anniversary of KJI’s songun leadership.  Kim also conducted a Vietnamese military delegation’s September 2008 trip to the DPRK.

Kim Jong Gak was formally elected to the expanded National Defense Commission at the first session (plenum) of the 12th SPA in April 2009.  Gen. Kim was observed or reported having joined Kim Jong Il at concerts or attending military inspections on 30 occasions in 2009.  Gen. Kim was listed as #11 on the rostrum of a national memorial service held to commemorate the 15th anniversary of Kim Il Sung’s death in July 2009.  Gen. Kim led a MPAF GPD delegation on a trip to China in November 2009 and visited Beijing.  During that trip, Gen. Kim traveled to Jilin Province, PRC, and visited the Yuwen School.  He ended 2009 by delivering the keynote speech at a national meeting held in honor of DPRK military hero, O Jung Hup.

In May 2010, Kim Jong Gak presided over a ceremony at the MPAF where bronze statues of KIS, Kim Jong Il and his mother, Kim Jong Suk, were unveiled.  Gen. Kim was responsible for the first publicized dedication of a KJI statue and at the unveiling ceremony delivered the keynote speech. 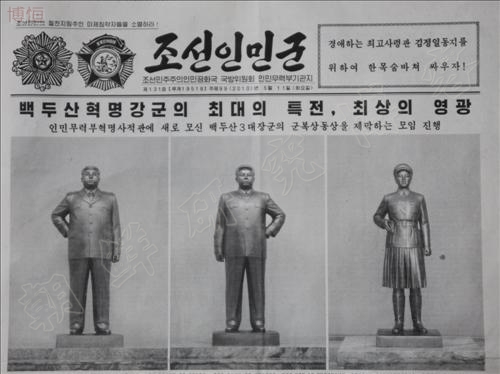 The cover of the KPA daily reporting on the statue unveiling ceremony presided over by Gen. Kim in May 2010

Kim Jong Gak is part of a group of 2nd and 3rd Generation DPRK leaders who have moved to the power center in the last five (5) years.  Gen.  Kim has appeared on numerous occasions with Chief of the General Staff, Gen. Ri Yong Ho.  Like Kim, Ri is believed to be a hardliner, which is to say generally opposed to relations with the US and ROK and highly wary of the DPRK’s interactions with other foreign countries.  Gen. Kim played a leading role in education and indoctrination efforts within the KPA in support of Kim Jong Un’s succession.

Kim Jong Gak was elected a member of the Party Central Military Commission and alternate member of the CC KWP Political Bureau on 28 September 2010 during the 3rd Party Conference.  In February 2012, Kim was promoted to Vice Marshal and was appointed minister of the People’s Armed Forces in April.  In November 2012 he was removed from office as Minister of the People’s Armed Forces.  At the March 2013 meeting of the KWP Central Committee, Kim was removed from the KWP Political Bureau and at the 7th session of the 12th SPA on 1 April 2013 was removed as member of the National Defense Commission “due to the transfer to other jobs.”  Kim, however, was a rostrum member at the SPA session and continues to appear with other members of the DPRK leadership.

(November) Removed as Minister of the People’s Armed Forces