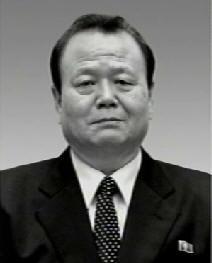 Pak To Chun (Pak To-ch’un) is a member of the National Defense Commission, Korean Workers’ Party [KWP] Secretary (with the portfolio for military and machine-building industries) and a member of the KWP Political Bureau.  Pak is one of several 2nd generation elites who moved to the power center during 2009-2010.  He is a former manager in military and machine building industries.

Pak held a number of party organizational positions at factories and mines, including complex- and primary party committee secretary, notification instructor (reporting directly to the central party) and section chief.  He was first elected a Supreme People’s Assembly [SPA] deputy in 1998.  In the late 1990s he was secretary on the Chagang Province KWP Committee.  In June 2005 Pak formally succeeded Yon Hyong Muk (Yon Hyo’ng-muk) as Chief KWP Secretary of Chagang Province.

Chagang Province is the location of many factories and other production facilities involved in conventional arms, military equipment and supply, and machine-building industry.  While Pak served as party secretary and chief party secretary, he supervised the modernization, in the form of numerical and computer numerical control [CNC], in the province’s machine-building and arms production factories.  Chagang Province was at the center of a number of propaganda campaigns and slogans [“Kanggye Spirit,” “Hu’icho’n Speed”].  The economic complexes are portrayed as models for emulation in the development of kangsong t’aeguk (a strong and prosperous nation) and kangsong gukka (a powerful state).  Highlighted along with this are the province’s contributions in the development of computer numerical control [CNC] technology.  The construction of the  Hu’icho’n Power Station commenced while Pak was party secretary.  This has been used to promote people-army unity and Km Jong Un’s practice of 3rd generation kwangpok politics.

In September 2010, Pak To Chun was elected a member of the Party Central Committee (CC KWP), an alternate [candidate] member of the Political Bureau and KWP Secretary for Military and Machine-Building Industry.  In the latter position he succeeded Jon Pyong Ho.  Pak To’-ch’un continued his advancement in the central leadership from late 2010 to 2011.  On 7 April 2011, Pak was elected a member of the National Defense Commission, again replacing Jon Pyong Ho.  In 2012 Pak was given the rank of KPA General (taejang) and like other central party officials occasionally appeared in a full-dress uniform.  During 2012 Pak supervised the failed launch of the U’nha-2 carrier rocket and its payload the Kwangmyo’ngso’ng-3 satellite.  He later supervised the second U’nha-3 launch in December 2012.  Pak also supervised technical preparations and had operational management over the DPRK’s third experimental nuclear detonation which occurred in February 2012.