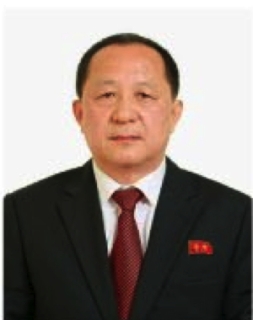 Ri Yong Ho is the DPRK’s Foregin Minister. He is also an alternate (candidate) member of the Workers’ Party of Korea [WPK] Political Bureau and member of the WPK Central Committee.  Ri is a 3rd generation DPRK elite and a protégé of Kang Sok Ju.  For nearly 20 years he has been one of the central diplomatic managers of the country’s relations with the US, UN and the ROK and a primary interlocutor with representatives of the US during official, Track 1.5 and Track 2 discussions.

Ri began his career at the Ministry Of Foreign Affairs in 1978.  From 1979 to 1984 he held the title of secretary at the DPRK’s embassy in Zimbabwe.  From 1985 to 1988 he held the same position at the DPRK’s embassy in Sweden.  Ri Yong Ho returned to Pyongyang in 1988.  From 1988 to 1995 he was a manager of the Foreign Ministry’s International Organizations Bureau, eventually promoted to deputy director-general.

In 1995 Ri was promoted to Foreign Affairs councilor. He began participating in the DPRK’s negotiations with the US over its nuclear programs.  He accompanied NDC 1st Vice Chairman, Jo Myong Rok, on a 2000 trip to the United States.  In the 2000s Ri would hold several ambassadorial titles, including representing the DPRK in western Europe.  Ri returned to Pyongyang to become a general diplomatic counsel, including some responsibility for the 6 Party Talks.

Ri Yong Ho accompanied DPRK Foreign Minister Pak Ui Chun on his trip through Asia, including to the ASEAN forum in Hanoi, in July 2010 and participated in interactions with US and ROK officials (jointly and severally) during 2011 to 2013.  Ri was appointed Vice Minister of Foreign Affairs 23 September 2010, replacing Kim Kye Kwan who was promoted to Senior Vice Minister of Foreign Affairs.  He was elected an alternate (candidate) member to the WPK Central Committee on September 28, 2010.

He was elected a deputy (delegate) to the 13th Supreme People’s Assembly in March 2014.  In May 2016, Ri was elected a full member of the WPK Central Committee and an alternate (candidate) member to the WPK Political Bureau.  He was appointed Foreign Minister on May 9, 2016, replacing Ri Su Yong who was elected WPK Vice Chairman and Director of the WPK International Affairs Department.

Ri Yong Ho was born in 1954.  He is the son of Ri Myong Je, a former KCNA editor who has served as a deputy director of Kim Jong Il’s Personal Secretariat where he managed KJI’s residences and domestic life.  As a bona fide princeling,  Ri Yong Ho attended Namsan Senior Middle School and studied English at Pyongyang University of Foreign Language.